The great free trade and most astute defender of liberty from France Frederic Bastiat said “Trade barriers constitute isolation; isolation gives rise to hatred, hatred to war, and war to invasion.” These words ring more true than ever as Russia invades Ukraine and the illusionary veil of peace is removed, a distant but ever existing reality hits home. The reality that conflict and not peace is the true nature of human existence, it always was and it always will be. This conflict is born out of the innumerable differences that exist amongst us as different members of the human race. While there are differences, the majority of the population alive today has managed to live in the world without the imminent danger of bloodshed and war on European soil in any manner which has the ability to engulf the whole world. How has that come to be?

For pacifists among us who deplore violence of any kind or form, be it for any end, it continues to remain a moral pursuit to understand and push for peace even if it’s not everlasting. The nature and cause of peace which exists even if fleeting is borne out of the same differences which exist amongst us. The problem is not how to wipe out all differences, but how to unite with all differences intact as it is through these differences that gives rise to different tastes, different preferences, and different abilities which we portray outwards into the world through our actions in the marketplace. Where out of our unique differences we create different goods and services and offer them to others who when they value our goods more than their money results in exchanging their money for our goods, in the process making both of us better off.

Existence and exchange of multiple goods and services on the market place exists due to the existence of differences in valuations by different individuals. Thus it is not our inherent differences per se which is responsible for wars and conflict but the inability to use such differences for the welfare of everyone through trade and exchange which results in conflicts of all kinds.

Ukraine and Russia are bordering nations today but this wasn’t always the case, for a long period of time Ukraine was part of the soviet union but after the USSR finally collapses on December 25, 1991, Ukraine becomes an independent nation and spends the next few years in twists and turn with its former partner Russia. 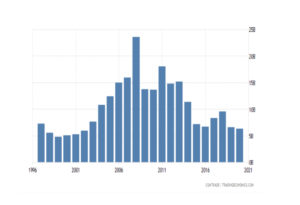 Russia and Ukraine signed a friendship and cooperation treaty in 1997 and trading between the nations continues to grow but it was not until the early.

2000s that trade really started to blossom between the two countries. After which trade expands exponentially amongst the two countries making both countries both economically and politically better off. Trading relations kept improving with the removal of trading barriers between both nations. Then comes the inflection point in 2011 after which th econsumer sector of their international trade relations which had been steadily rising suddenly becomes non-existent in a span of a few years.

This bilateral fall of the consumer goods sector, accentuated by the further fall in trading of capital and intermediate goods, provided the fertile grounds for amenities to grow and prosper which finally resulted in calls of complete abolition of trading relationships between both countries when On December 30, 2015, President Putin signed Federal Law 410 Suspending the FTA between Russia and Ukraine. In response, on January 2, 2016 Ukraine’s Cabinet of Minister’s enacted resolution No. 1146 of December 30, 2015, which abolished trade preferences for goods from Russia. Both Russia and Ukraine have since continued to extend the mutual abolition of trade preferences, such that currently, there are no trade preferences between Russia and Ukraine, and instead there is an increasing number of restrictions in Russian-Ukrainian trade in both directions.

While isolation in trading provides fertile grounds for conflicts and sometimes an inevitable war, active economic interests and trade even between conflicting nations act as a deterrent to minimize chances of a war. This has been the case for two nuclear powers India and China where despite some border issues, growing economic interests between both countries have provided stability. This growing bilateral trade has allowed both countries to find mutual ground for peace and prosperity despite differences.

Hence as pacifists in pursuit of peace, free and unfettered trade is one our strongest weapons against conflicts which have and will always arise from the differences that exist among us. The horrors and cries which are coming out of Ukraine today might well have been avoided if goods and services were crossing borders.

Vibhu Vikramaditya is an economics scholar in the Austrian tradition.