Andrew Cockburn: Blips On The Screen

What is the point of having this superb military if you can’t use it? 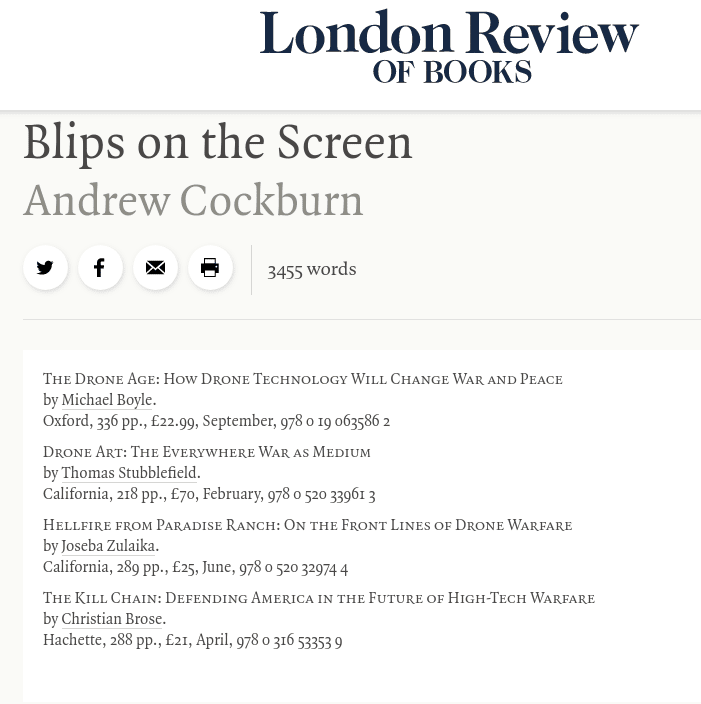 The record of this year’s wars shows that although these weapons may not provide a decisive edge in combat they excel in self-advertisement, projecting an image of all-seeing omnipotence. Drones induce terror in civilian populations and healthy profits for manufacturers. The spell persists even when they are unarmed. Protesters in Minneapolis on the morning of 29 May, three days after local police murdered George Floyd, were monitored by a Reaper drone deployed by US Customs and Border Protection, circling four miles above the city. News of the deployment elicited widespread alarm; a letter signed by several senior members of Congress condemned the use of ‘live video feeds’ for the purposes of law-enforcement. All demonstrations during the post-Floyd protests were exposed to the full machinery of  government surveillance – intrusive monitoring of social media, cellphone traffic and cameras at ground level – but it was the use of drones that caused the outrage, a testament to the fascination these machines exert.

"NSA whistleblower Reality Winner, who was the first to be prosecuted under the Espionage Act under Trump, and former CIA officer John Kiriakou pursued pardons. They were effectively denied as well. On January 17, the New York Times reported that an associate of Trump...

END_OF_DOCUMENT_TOKEN_TO_BE_REPLACED

Some wonderful ridiculous woman made this hilarious song about us all partying at Tom Woods' house: https://www.youtube.com/watch?v=FNk-XJvgtC4