Virginia — Kicking off what CNN called “the most crucial week of statesmanship so far” for the new U.S. president, NBC Washington reported Monday that police in Virginia are investigating a striking piece of vandalism at the Trump National Golf Club.

“Vandals dug holes in the club’s 13th fairway of the club’s Championship Course, spray-painted parts of the course and poured a chemical, believed to be bleach, on the grass, said the Loudoun County Sheriff’s Office.”

Continuing, NBC explained what makes the vandalism so profound:

“The word ‘resist’ was spray-painted on the fairway and symbols associated with anarchists appeared to have been spray-painted and dug into the course.” 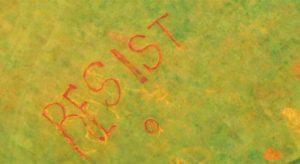 The incident was reported Saturday morning, a day ahead of a scheduled golf game at the course between President Trump and Senator Rand Paul.

When CNN said this would be a challenging week for the president in terms of diplomacy, it was referring to the fact that on Friday, Trump is set to sit down with the most powerful world leader he’s faced yet — China’s President Xi Jinping.

U.S. tensions are high with China, with territorial disputes in the South China Sea and concerns over global financial markets pitting the two superpowers in a standoff.

It can’t look good for the Donald, then, to have a rival world leader in town days after an anti-government group publicly exhibited such a bold statement in opposition to his rule — and on the man’s own soil, no less.