This sham chemical weapons claim is what drove Trump to conduct a missile strike on Syria at the urging of his generals. 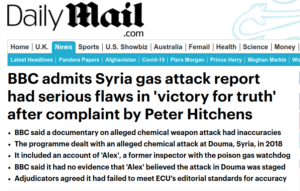 “The BBC has admitted that a Radio 4 documentary on an alleged chemical weapon attack in Syria contained serious inaccuracies. The Corporation’s Executive Complaints Unit (ECU) upheld a protest from Mail on Sunday columnist Peter Hitchens following last November’s broadcast of Mayday: The Canister On The Bed. Adjudicators agreed that the programme by BBC investigative journalist Chloe Hadjimatheou failed to meet the Corporation’s editorial standards for accuracy by reporting false claims.”