Even by Afghanistan’s grim standards, 2019 has been particularly deadly for children

The real cost of war AP.

A new report by the U.N. children’s agency, released Tuesday, says that in the first nine months of this year, nine children were killed or maimed every day as a result of war.

Since the ICRC began its rehabilitation program in Afghanistan in 1988, more than 177,000 people, including more than 46,000 amputees, have been treated at its centers across the country. Among the amputees registered, 77% were landmine victims and 70% of those were civilians.

The harm inflicted by more than four decades of war has been cumulative.

In 2018 Afghanistan was the world’s most lethal warzone, said the UNICEF report. 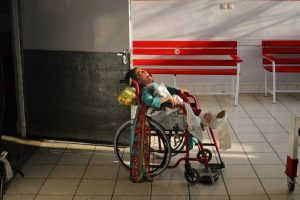 In this Thursday, Dec. 5, 2019, photo, a young Afghan girl, who was wounded in a blast, cries as her relatives left after paying her a visit at Emergency Surgical Center for Civilian War Victims in Kabul, Afghanistan. The total number of children killed or maimed in more than four decades long Afghan war is not known. But, with a population where close to 50% are under the age of 20, the losses among the young is tremendous. (AP Photo/Altaf Qadri)