Flattening the Curve, Prolonging the Pain 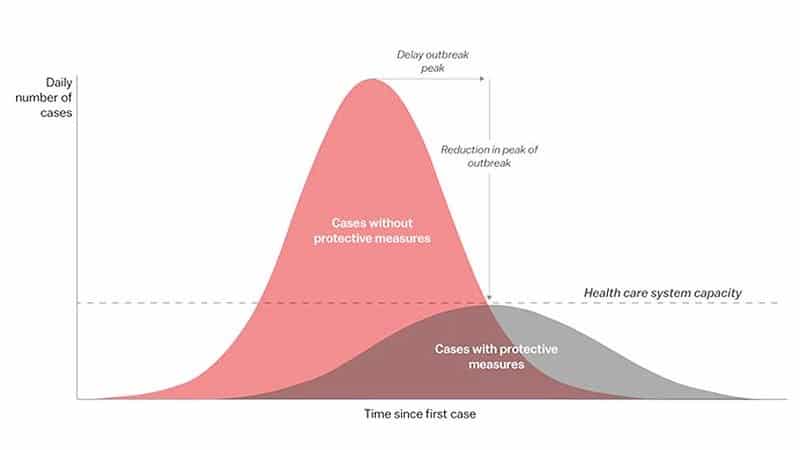 I want to discuss the above graphic since it, or some version of it, has been promulgating the 24/7 media coverage and the internet. I realize the point of “flattening the curve” is to decrease the number of people who get COVID-19. That seems reasonable on face value, but it only highlights the Y axis of the graph. Maybe it’s just me, but the first thing that jumped out was the X axis. By flattening the curve, we are going to delay how long this crisis spreads. Now, it appears from the graphic that the goal is to keep the number of cases below our health care systems capacity. But this graphic does not take into account the cost we will have to pay to flatten the curve. Most Americans, indeed people all over the world, are already feeling the financial consequences of flattening the curve.

Does anyone else find it odd that the top of the bell curve of the “Cases with protective measures” just happens to fall underneath the line for health care system capacity? There are no numbers representing anything on the X or Y axis. Who has determined what our health care system capacity is? A quick Google images search of “flattening the curve” will show similar images representing the same thing. After looking through the first 50+ images, I didn’t see a single one with actual numbers on it. People are just promulgating and reproducing the same image with no idea what the numbers actually represent.

The health care system capacity certainly varies across the country from state to state and even within states. In my state of Tennessee, the city of Nashville and Williamson County, a major suburb of Nashville, have the highest number of cases. As of this writing they stand at 101 and 35 cases respectively.1 I am not an expert in the health care industry, and from what I have read it does seem like the numbers in these areas will continue to grow. But this certainly doesn’t seem like it would overwork the health care system.

Now I will grant you that some protective measures have been put in place. Bars and restaurants have been told to close down and most businesses are placing themselves on a self imposed quarantine by having people work from home or take time off. So yes, the number of cases would likely would be higher if no measures were put in place. Let’s use the graph, with a complete lack of numbers, to try to figure out where these cases would be had no protective measures been put in place. Eyeballing the graph, it looks like the number of cases would be triple what they are now. That would put Nashville and Williamson county at 303 and 105 cases respectively. Again, I’m no health care expert, but this doesn’t seem to be enough to overload the system, even in this worst case scenario.

Even if we take the higher number of infected patients, not everyone who has COVID-19 needs to be hospitalized. In fact, unless you are severely sick, have a weakened immune system, or are elderly, you should avoid going to a hospital. If you think you might have COVID-19, you should self-quarantine. If your symptoms get worse, then you should go to the hospital. For the majority of people, having COVID-19 is like having the flu. Its not fun, but it is not going to kill you.

Another reason that the health care system’s capacity won’t be overworked is that governments are loosening regulations to allow for more flexibility. In Tennessee, hospitals wanted to put physicians assistants to work on COVID-19 cases. This would free up a lot of physicians to keep focused on daily medical needs while tapping into a pool of highly qualified medical professionals to tackle COVID-19 in Tennessee. The problem is that physicians assistants, under licensing laws, have to have a physician overseeing them who is working in the same field. This would defeat the purpose of splitting up the physicians and physicians assistants to tackle two simultaneous problems; daily medical needs and COVID-19. The Governor signed an executive order on Thursday, March 19th to suspend the licensing requirement during this state of emergency.2

I think this shows, in a reasonable and prudent way, how we could handle the worst case scenario along the Y axis. I know a lot of you are thinking that these measures need to be taken to protect at risk populations. I will cover that later, but for now I want to focus simply on this graphic.

Let’s take a better look at the X axis and talk about some of the implications. If the Y axis’ main concern was whether or not the health care system could withstand a spike in COVID-19 cases, as indicated by the horizontal line at the top of the bell curve, then there should be a vertical line indicating the economies capacity to withstand shutting everything down. By flattening the curve, we have also stretched it out over time, causing this crisis to take even longer than if it ran its normal course.

The economic repercussions could prove to be far more deadly than the virus itself. People are already worried about paying rent and finding toilet paper. I don’t want to add to the spread of fear. Quite the opposite, I hope to alleviate some undo fear and show how taking extreme measures to mitigate the spread could lead to side effects that are worse than the disease, metaphorically speaking. Below are some real world examples of the economic side effects.

I manage some properties for an old Army buddy of mine. One house has several girls living there and two of them are out of a job because they work in the restaurant industry and the city of Nashville has closed down all bars and restaurants. This could mean that the tenants cannot meet their rent. The owner is currently going to school, so he depends on the profits from the rent to pay his own bills. The bank who he has his mortgage through depends on him paying his mortgage on time. Now multiply this across the city, state, and country. Shutting down even a couple of industries has far reaching consequences that are much greater than trying to protect one industry. I think we have shown thus far that the health care industry has reasonable flexibility too meet the added pressures from COVID-19 patients.

On a larger level, we have the federal government passing stimulus packages to pump trillions of dollars into the economy. Printing money brings down the value of the dollar, meaning that all the money people do have saved will be worth a lot less down the road. This is what happened with the banker bailouts during the Great Recession. Failing banks who should have gone under because they made too many risky decisions were instead rewarded with a bailout. The executives who should have been out of a job were still able to receive their million dollar bonuses.

Printing money and giving every qualified American $1,200 also is not the answer. We have the same issue of printing money causing inflation, which makes the value of the dollar go down. It also doesn’t solve the problem. This might help people pay rent and mortgages in April but what happens in May when people are still trying to catch up on all their other bills? These are the same drastic steps that Germany attempted between World War I and World War II. That excessive printing of money caused such hyperinflation that people paid for dinner at the beginning of their meal, because by the end of dinner, the check would be more expensive.

There needs to be a balance between keeping the economy going and keeping people safe. The solution is relatively easy and doesn’t require draconian, over the top government solutions. I know a lot of people say that everyone needs to self-quarantine, even if they are relatively safe from COVIN-19. The idea being that they may come into contact with someone who has a compromised immune system or is elderly. But it is unreasonable and unnecessary to shut down the entire economy in order to protect a small segment of the population. You have most likely seen videos of celebrities showing how they are social distancing from their elderly parents or grandparents and imploring young people to take this seriously and self-quarantine. Isn’t the solution to the problem right there in those videos? The people who are at risk need to be the ones who are self-quarantining. That will allow the economy to continue to move along.

I know there are issues with comparing COVID-19 to the flu. I understand that the death rate of COVID-19 is around 3% and the flu is around .1%. We have already discussed how this virus only effects a small portion of the population, so as long as they self-quarantine, they are effectively safe. Meanwhile, there have been less than 12,000 deaths worldwide from COVIN-19. I acknowledge that that number will go up before its over. However, that worldwide number seems pretty low when you realize that during the 2017-2018 flu season, there were 61,000 flu related deaths in the US alone.3 If we are taking such drastic measures over 12,000 worldwide deaths, why don’t we try to flatten the curve every flu season to prevent 61,000 deaths?

I hope you don’t get me wrong. I do have concern and compassion for anyone who is suffering during this crisis. My sympathies go out to both those effected with or who have lost loved ones from the virus and to people who have been put through undo financial stress due to no fault of their own. I think we all need to take a step back from the 24/7 news cycle and realize this is not the end of the world. Take precautions if you are in an at risk group, but otherwise, things should be business as usual.

This article was reprinted from OperationLibertas.com

Jordan Gambrell was a Green Beret in the US Army, deploying to Iraq, Turkey, and Syria. Jordan started Operation Libertas to help defend freedom by working with defenders of liberty and like-minded organizations. Jordan has a history degree from the University of Alaska Fairbanks.