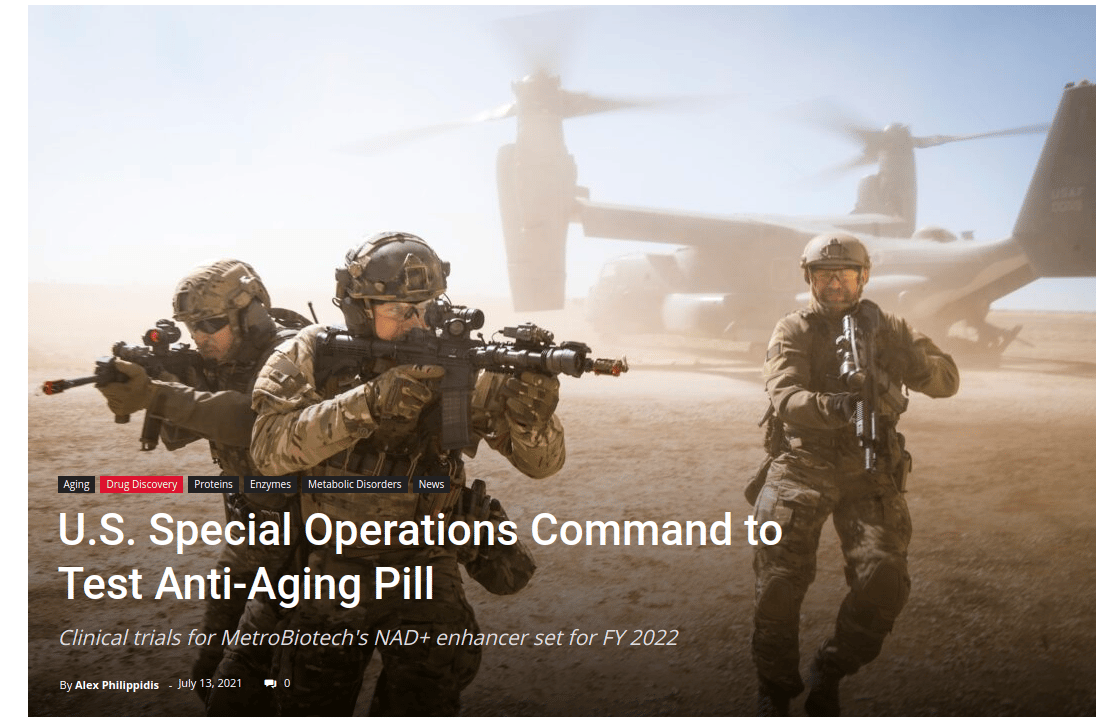 The U.S. military says it is months away from launching clinical trials of a pill designed to block or reduce many degenerative effects of aging—an oral treatment that a leading researcher in the field says is better than nothing while questioning how effective it will ultimately prove.

SOCOM and MetroBiotech are set to start clinical trials during the 2022 federal fiscal year, which starts October 1.

“If the preclinical studies and clinical trials bear out, the resulting benefits include improved human performance, such as increased endurance and faster recovery from injury,” Hawkins said.

“This effort in particular is about enhancing the mission readiness of our forces by improving performance characteristics that typically decline with age,” Hawkins explained. “These efforts are not about creating physical traits that don’t already exist naturally.”

The SOCOM testing is among studies being carried out to assess MetroBiotech’s lead candidate, David J. Livingston, PhD, MetroBiotech’s president and CSO, told GEN.  “I can confirm that we and our clinical partners have completed multiple Phase I human safety trials of a lead molecule,” Livingston said. “Metro has also initiated exploratory Phase II studies in several areas of therapeutic application, including the treatment of rare diseases, diseases of aging, and in collaboration with SOCOM, studies on the effects of our compounds on muscle energetics and human performance.” Livingston said MetroBiotech won’t discuss details of its clinical trials in advance of future postings on ClinicalTrials.gov or joint publications of clinical data.
Potential to “truly delay aging”

SOCOM has spent $2.8 million on its anti-aging effort since it began in 2018, Hawkins said.

“This small molecule has the potential, if it is successful, to truly delay aging [and] truly prevent onset of injury, which is just amazingly game-changing,” Sanders said, addressing “Assisting the Modern Warfighter,” a featured session held as part of the Defense One Defense Tech Summit, held June 21–25.