Glenn Greenwald On The Coalition Of Pro-War Democrats And Republicans

Glenn Greenwald at The Intercept: How The Armed Services Committee, In The Middle Of A Pandemic, Approved A Huge Military Budget And More War In Afghanistan.

For anyone that needs a reminder of what Democrats (and some Republicans) were saying about V.P. Dick Cheney after the Iraq War, go back and read this article from The Atlantic:

“When Vice President Dick Cheney left office, his approval rating stood at a staggeringly low 13 percent. Few political figures in history have been so reviled.” 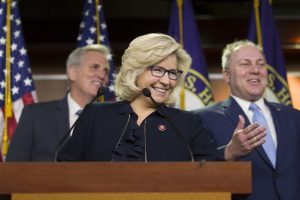 Apparently all is forgiven (or forgotten) as Republicans and Democrats teamed up with the heir of the Cheney war hawk clan, daughter Liz Cheney, to pass a series of amendments that set conditions on removing troops from Afghanistan (essentially blocking the Trump administration) and increasing military spending while the country is economically suffering from the coronavirus response.

As we reported last week, pro-war and militaristic Democrats on the Committee joined with GOP Rep. Liz Cheney and the pro-war faction she leads to form majorities which approved one hawkish amendment after the next. Among those amendments was one co-sponsored by Cheney with Democratic Rep. Jason Crow of Colorado that impeded attempts by the Trump administration to withdraw troops from Afghanistan, and another amendment led by Rep. Ruben Gallego, D-Ariz., and Cheney which blocked the White House’s plan to remove 10,000 troop stationed in Germany.

In Washington their is only one party – the war party.

‘Tell my kids I love them. I’m dead.’ -George Floyd

END_OF_DOCUMENT_TOKEN_TO_BE_REPLACED

Central Banks of course. "In lieu of common sense, however, the guilty will use a whole lot of those impressive sounding words to obfuscate instead of argument, while very much counting otherwise on the favorable rulings of the judge (politicians) who lets this...