The Yemen Houthi military is reporting that thousands of Saudi troops including mercenaries, border troops and several Saudi officers have been captured or killed in Operation Victory From God.  Al Jazeera is reporting that the Houthi targeted the southern region around Najran in a cross-border operation.

Nasser Arrabyee is also reporting on Twitter.  Nasser is claiming the Houthi captured 3 Saudi brigades and that hundreds of Saudi soldiers have been killed.  This is a huge victory for the Houthis especially coming right after the attack on Saudi oil facilities.  After years of war and bombing of Yemen, the Houthis have shown they are resilient and a formidable military force.  Saudi Arabia can’t win this war using air power and mercenaries, they should sue for peace and go back to making trillions of dollars selling oil and living the life of luxury. 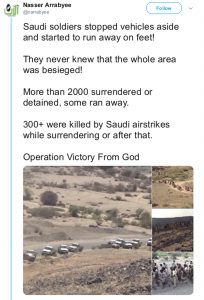