Jimmy Aldaoud Died After Being Deported To Iraq, Laid To Rest In Michigan

Jimmy Aldaoud was laid to rest in his home state – Michigan.  He was deported to Iraq under the Trump administrations deportation policy even though he had never been to Iraq, did not speak the language, was mentally ill and dependent on insulin. 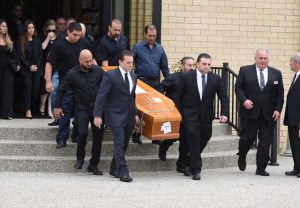 Aldaoud was born in a refugee camp in Greece in 1978 after his parents, George and Widad Aldaoud, fled Iraq between wars. His family was granted refugee status in the United States in 1979, and the family traveled from Greece to Detroit when Aldaoud was about a year old.

The Detroit News reported that his death, based on family accounts, came after he was unable to find insulin in Iraq. His family and friends in the U.S. said Aldaoud, who they say was bipolar and schizophrenic, had been living on the streets in Baghdad with two other men who had been deported the same day. He was 41 years old. Aldaoud’s body was reunited with his family after community leaders and elected officials worked with the Iraq consulate to return him to Michigan.  While the family says it is grateful for his return, members say he never should have been deported.

Immigration officials claimed the case was reviewed by the courts as if that gives them absolution from the sin of murder.

Following his death, immigration officials said, “Aldaoud’s immigration case underwent an exhaustive judicial review before the courts ultimately affirmed he had no legal basis to remain in the U.S.”

What is the death of one mentally ill man to a state that has killed millions?