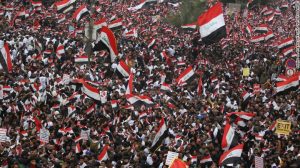 From CNN.  “Hundreds of thousands of protesters marched through Baghdad on Friday calling for US troops to leave Iraq, heeding the call of powerful Shia cleric Muqtada al-Sadr who called for a “Million Man March.”

The Telegraph is reporting that U.S. and British diplomats are working on a plan to reduce the number of troops in Iraq hoping this will appease the Shia coalition and reduce tensions.  We have been down this road before though – talk of troop withdrawal which never actually happens.  This time may be different.

While both Iran and the US have stepped back from all-out confrontation over Mr Soleimani’s killing, diplomats have not yet ruled out the prospect of further bloodshed.

They are particularly worried about the pro-Iranian Shia militants in Iraq, who have threatened to mount their own attacks on US troops and other American targets.

“No to America, and no to Iran. Iraq is for Iraqis,”