The coronavirus has turned life upside down in the blink of an eye. Just a month ago, new claims were in the low 200,000s and sat near a half-century low.

Already, the ranks of the unemployed appear to have exceeded the prior record of 15.3 million during the 2007-2009 Great Recession.

What’s more, the number of Americans collecting benefits has quickly topped the prior all-time high of 6.6 million. Some 7.5 million people were receiving benefits at the end of March, according to delayed government data on continuing claims. They are reported with a one-week lag.

The big picture: The unprecedented surge in jobless claims has already pushed unemployment above 10%, economists say, more than double the officially reported 4.4% rate in March.

The current pace of job losses suggest the unemployment rate will soon move past 15% and perhaps even exceed 20%, coming close to levels last seen in the 1930s. 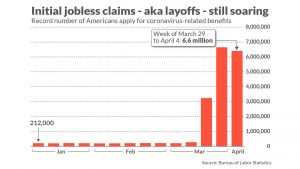