Of all tyrannies a tyranny sincerely exercised for the good of its victims may be the most oppressive. It may be better to live under robber barons than under omnipotent moral busybodies. The robber baron’s cruelty may sometimes sleep, his cupidity may at some point be satiated; but those who torment us for our own good will torment us without end for they do so with the approval of their own conscience.”—C.S. Lewis

Israel Prime Minister, Benjamin Netanyahu suggested that children should have a microchip sensor that would warn them when people are getting too close:

“While speaking at a press conference on Monday, Netanyahu suggested the Health Ministry use new technology to help Israel adjust to its new routine as the state is lifting the coronavirus lockdown. “That is, technology that has not been used before and is allowed under the legislation we shall enact,” he clarified.

“I spoke with our heads of technology in order to find measures Israel is good at, such as sensors. For instance, every person, every kid – I want it on kids first – would have a sensor that would sound an alarm when you get too close, like the ones on cars,” the prime minister said.”

And, in the “land of the free”, Washington Governor Jay Inslee has rolled out a plan for mandatory testing for coronavirus called “Contact Tracing: Box In The Virus. The plan is described in The Lynnwood Times. When asked by a reporter how it would be enforced this is his response:

“We will have attached to the families a family support person who will check in with them to see what they need on a daily basis… and help them. If they can’t get a friend to do their grocery shopping, we will help get them groceries in some fashion. If they need pharmaceuticals to be picked up, we will make sure they get their pharmaceuticals… That’s going to help encourage them to maintain their isolation too.

“As far as refusal, it just shouldn’t come to that, and it really hasn’t. We’ve had really good success when we ask people to isolate, and they’ve done so in really high percentages, so we’re happy about that, and we believe that will continue.”

Therefore, those individuals that refuse to cooperate with contact tracers and/or refuse testing, those individuals will not be allowed to leave their homes to purchase basic necessities such as groceries and/or prescriptions. Those persons will need to make arrangements through friends, family, or a state provided “family support personnel.” 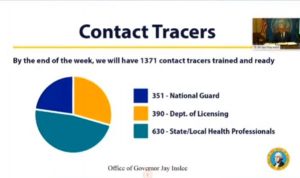