Natasha Leonard of The Intercept has been following the story of 18 year old Anna Chambers (not her real name) who was raped by two undercover cops while in their custody for a minor drug charge. 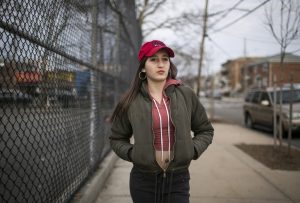 Anna Chamber at a park in Brooklyn. Photo by Nicole Craine

The Chambers case should have been clear-cut from the moment in September 2017 that a hospital rape kit found semen matching Martins’s and Hall’s DNA inside the teenager’s body. The young woman had been detained, handcuffed, and taken into the officers’ unmarked van, having been found in possession of a small amount of drugs. Chambers performed oral sex on both officers and had vaginal sex with Martins. Then the cops left her on a corner.

At the time of the crime, New York law did not acknowledge that a person in custody cannot consent to sex.  Though the state legislator did correct this, it was too late for Anna Chambers.

New York State Senate unanimously passed a bill that should have always been a law. Senate bill S7708 asserts that when a person is “under arrest, detention or otherwise in actual custody” by a police officer or other law enforcement official, that person is incapable of consenting to a sexual encounter. That is to say the obvious: There’s no uncoerced sex in police custody — there’s only rape.

Even though the prosecutor recommended a jail sentence, Judge Danny Chun gave them only 5 years probation.

We have two justice systems in this country.  One for regular people and one for state actors.  The entire American justice system is corrupt – cops, judges, prosecutors, prisons, and politicians.  These two cops should be in jail.

You can read more of Natasha Leonard’s great reporting on this case here, here and here.