There is a saying amongst liberty minded people:

“There is no law so small that the police won’t kill you for.” 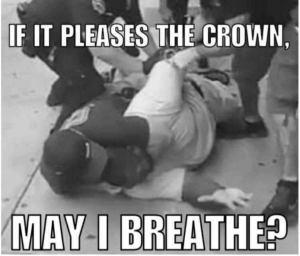 The meme above pictures the “arrest” of Eric Garner. He was standing in front of a Staten Island convenience store when NYPD officers walked up and accused him of selling “loose” (individual) cigarettes from packs that DID NOT HAVE A TAX STAMP.

Garner said he wasn’t selling “loosies” and told the police he was tired of being harassed. One officer responded by attempting to put Garner’s hand behind his back and cuff him to which Garner responded by pulling away. The officer then put Garner into a choke hold. Due to the choke hold and other tactics used by police Garner died. You can read the conclusions online. No officer suffered discipline. The autopsy is clear that the police broke “their own rules.”

You read that right, Eric Garner was put to death for suspicion of breaking the tax code. People like to say that the worst that can happen to you when you don’t pay taxes is jail time. It appears that some jurisdictions take their theft a little more seriously.