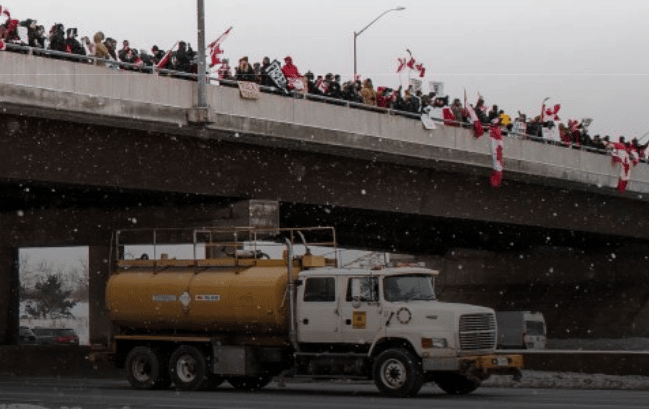 As regimes across the west engage in an arms race to see how much power they can exercise over their citizenry in the name of Covid, it has become increasingly obvious that the freedom to assemble is a privilege handed to the loyal, not a right afforded to free citizens. The fact that a doctrine of individual rights, liberal democracy and constitutional government has in no way inhibited the dynamic expansion of government power in western countries should give pause to those who have assumed these as shared values. It is clear that these words have become shibboleths stripped of any real meaning. The phrases are used as hollowed-out relics of a civic religion that once animated our civilization but can now only be worn as a skinsuit by those hoping to use the last bit of shared cultural fabric to herd their populations into the new security state that has been fashioned for them.

Still, the caravan of Canadian truckers reveals a serious flaw in the plans our ruling elites have laid out for their brave new world. The professional-managerial class that rules over much of the west built their power on technology and propaganda. Their loyal followers make up the staff of the universities, newsrooms, corporate HR offices, and public schools. They are the party of the laptop class, ruling through the manipulation of procedure and information. Automating away the working class is their eventual goal, but for now, they are heavily reliant on exactly that class to keep the already fragile infrastructure of their regimes running. They have attempted to abandon the working class before they can make them obsolete, and that is a serious tactical error.