Prosecutors: The Worst Criminals in Our Society 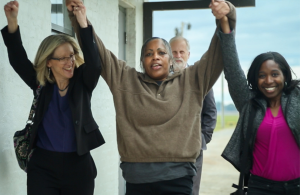 From the Center on Wrongful Convictions (Imagine for a moment that this was about your mom or sister or wife):

We are writing with the wonderful news that we have come to the end of the long road towards the exoneration of Ernestine “Tina” Jimerson, the first case that came to what was then the Center on Wrongful Convictions Women’s Project. On Thursday, the Dallas County Circuit Court signed an order dismissing Tina’s case on a motion from the Prosecuting Attorney’s Office!

We have circulated the details of this complex case several times, so we won’t re-tell them here. But as a reminder, Tina was sentenced to life for a 1988 robbery and murder that she did not commit, having become a suspect after reporting her own rape by a white man to the police. She ultimately was implicated by a mentally challenged man who was coerced to make incriminating statements by a jailhouse informant (unbeknownst to Tina), and who recanted his statement prior to Tina’s trial. After the CWC became involved in the case and discovered that crucial exculpatory evidence was suppressed and destroyed, we filed a federal habeas petition on Tina’s behalf in June 2015 in the U.S. District Court for the Eastern District of Arkansas. Later, when one of Tina’s co-defendants confessed that he alone had committed the rape and murder (with DNA evidence to prove it), we added a claim of actual innocence to Tina’s habeas petition. In October 2018, the district court vacated Tina’s convictions, finding due process violations under Brady v. Maryland (failure to disclose exculpatory evidence) and Arizona v. Youngblood (willful destruction of potentially exculpatory evidence). Tina was released pending the State’s appeal in October 2018. In April of this year, the Eighth Circuit affirmed the grant of habeas. Finally, after much communication with the prosecuting attorney’s office, the office agreed to drop the charges against both Tina and her co-defendant, John Brown (who is represented by the Midwest Innocence Project).

This victory, as always, involved a massive Northwestern effort. Karen Daniel agreed to take this case back in 2013, cared so deeply for Tina, and fought vigorously to clear Tina’s name. Andrea Lewis Hartung litigated this case alongside Karen, and continued to represent Tina after Karen passed away in 2019. CWC students worked on Tina’s case over the years both before and after graduating, located and digested archival case documents, researched Arkansas state law remedies and federal constitutional law, corresponded with the client, visited her in prison in Arkansas, and helped draft federal pleadings in both the district court and the Eighth Circuit. These students include Allie McDonald (JD ‘14), Jolie Waldman McLaughlin (JD ‘14), Alex Tievsky (JD ‘15), Rachel Dillon (JD ‘16), Sylvia Baraniewski (JD ‘16), Hane Kim (JD ‘20), and Sam Rasche (JD ‘20). Danny Greenfield (JD ’08) advised us on appeal, and helped prepare me for the oral argument before the Eighth Circuit. CWC Advisory Board member Stuart Chanen continues to represent Tina’s mentally challenged co-defendant Charlie Vaughn, who remains in prison today. Just as important was the work of alumna and former Innocence Project attorney Karen Thompson (JD ‘03), who was representing the co-defendant who confessed, and who demonstrated great grace and integrity in forwarding our team a signed confession affidavit, after her client authorized its disclosure. And our own Marjorie Moss provided social work support to Tina upon her release from prison.

With her exoneration, Tina joins the ranks of a growing sisterhood of women who have been exonerated by the CWC, including Tabitha Pollock, Julie Rea, Kristine Bunch, Nicole Harris, and Kerry Masterson. Tina spent more than 27 years incarcerated for crimes she did not commit. From the date Tina was arrested, it took 29 years, 5 months, and 14 days to exonerate her. But she is finally free, at least in the legal sense. We know Karen is here in spirit to see this case come to an end, and we are so happy to have this ray of light when so much darkness is present in our country today.

So all the government employees who suborned perjury, hid and destroyed the exculpatory evidence are all now going to be severely punished for their crimes right? </sarc>