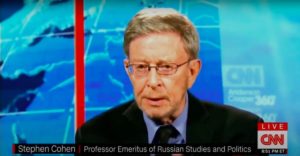 Caitlin Johnstone “One of the few precious voices of sanity on Russia”.

Stephen F. Cohen, an eminent historian whose books and commentaries on Russia examined the rise and fall of Communism, Kremlin dictatorships and the emergence of a post-Soviet nation still struggling for identity in the 21st century, died on Friday at his home in Manhattan. He was 81. His wife, Katrina vanden Heuvel, the publisher and part owner of The Nation, said the cause was lung cancer. From the sprawling conflicts of the 1917 Bolshevik revolution and the tyrannies of Stalin to the collapse of the Soviet Union and Vladimir V. Putin’s intrigues to retain power, Professor Cohen chronicled a Russia of sweeping social upheavals and the passions and poetry of peoples that endured a century of wars, political repression and economic hardships.
A professor emeritus of Russian studies at Princeton University and New York University, he was fluent in Russian, visited Russia frequently and developed contacts among intellectual dissidents and government and Communist Party officials. He wrote or edited 10 books and many articles for The Nation, The New York Times and other publications, was a CBS-TV commentator and counted President George Bush and many American and Soviet officials among his sources.
More here

How to Panic the Public

Disseminate worst-case scenarios, taking care to ignore the dubious assumptions that go into modeling while vilifying anyone, no matter how well-qualified, who refuses to ignore them. Emphasize the (alleged) benefits of a draconian government response, taking care to...