Resistance Is Futile: How The War On Terror Supercharged State Power 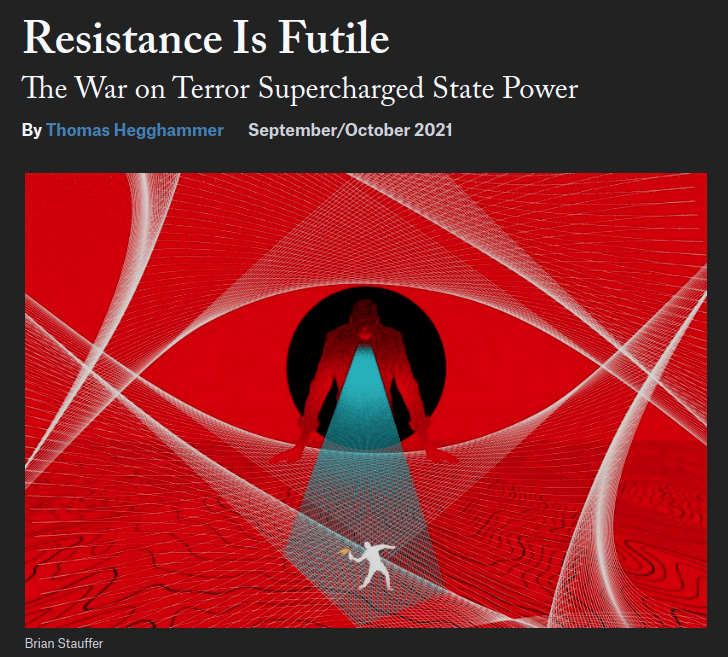 “What,” I sometimes ask students in a class I teach on the history of terrorism, “was the name of the Islamic State’s branch in Europe?” It is a trick question: the Islamic State (also known as ISIS) never set up a full-fledged European branch. The group’s self-proclaimed caliph, Abu Bakr al-Baghdadi, knew better than to try. By 2014, when ISIS formalized its split from al Qaeda and established itself as the dominant player in the global Salafi-jihadi movement, Western security services had figured out how to make it effectively impossible for the group to establish a base of operations in Europe or North America. Like al Qaeda before it, ISIS was only ever present in the West in the form of disparate cells and sympathizers. A traditional terrorist organization—with a functioning bureaucracy, regular meeting places, and in-house propaganda production—would, Baghdadi and his henchmen understood, have had as little chance of surviving in a contemporary Western country as the proverbial snowball in hell.
In fact, it has been decades since it was possible to run a major terrorist organization, capable of mounting a sustained campaign of large-scale attacks, in Europe or North America. Even the most notorious of the separatist movements and far-right militias that have originated in Western countries, and whose rhetoric can seem menacing, are comparatively small-scale operations; they survive because they kill relatively few people and never manage to attract the authorities’ full attention. The last high-impact terrorist organizations based in the West—the Basque separatists of ETA in France and Spain and the loyalist and republican paramilitaries in Northern Ireland—effectively collapsed in the 1990s under the weight of state countermeasures.
In the wake of the 9/11 attacks, it seemed that was all going to change. And of course, the past two decades have witnessed some horrific attacks on Western soft targets: the bombing of a train station in Madrid in 2004, the attack on a concert venue in Paris in 2015, the assault on a nightclub in Orlando, Florida, in 2016, among others. But such crimes were not the work of locally based organizations, and none of the perpetrators was able to strike more than once. Although for a time such swarms of weakly connected attackers periodically outmaneuvered Western security and intelligence services, the latter have adapted and, quite definitively, prevailed.
Spectacular though the 9/11 attacks were, they did not, as many feared, indicate that large and powerful terrorist organizations had laid down roots in the West and threatened the foundations of its social order. Meanwhile, the persistent fear of that outcome—which was never likely—has blinded many to an opposing trend: the steadily growing coercive power of the technocratic state. With artificial intelligence already entrenching this advantage, the threat of a major armed rebellion, in developed countries at least, is becoming virtually nonexistent.

END_OF_DOCUMENT_TOKEN_TO_BE_REPLACED

We really need to abolish germ warfare, don't we? More comics at the Webcomic Factory.

END_OF_DOCUMENT_TOKEN_TO_BE_REPLACED

RE: TGIF: Inflation Is Evil