Saudi Arabia’s Scramble For An Exit Strategy In Yemen

By Thomas o Falk at Aljazeera

Is their an end in sight for the war in Yemen? 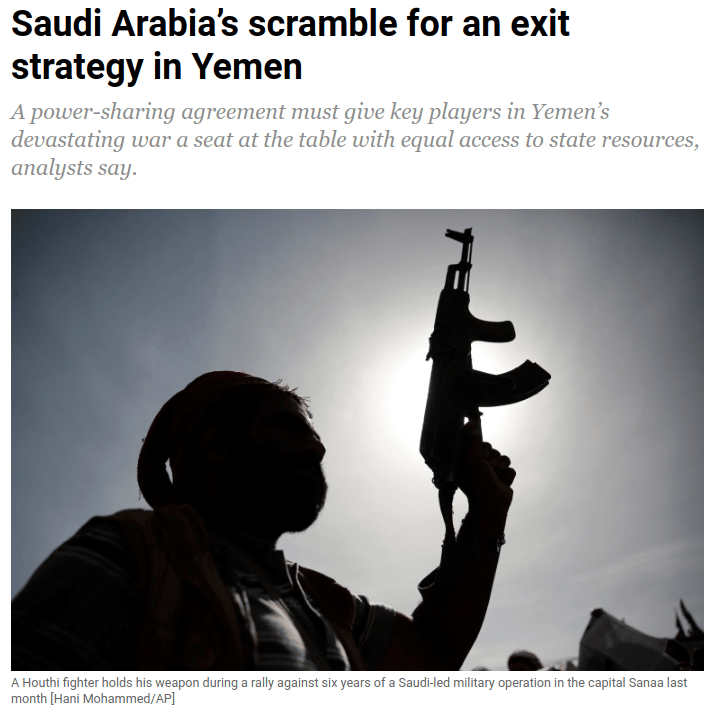 Meanwhile, the US, United Nations, and regional mediator Oman still see an opportunity for negotiations. With the mediation of Oman, the Houthis have been negotiating with the US representative, Timothy Lenderking, for weeks. On Wednesday, it was reported that Oman hoped for an agreement between Saudi Arabia and the Houthis “very soon”.

However, Washington’s influence on facilitating a peaceful solution might be limited.

“The only real leverage the US has is with the Saudis and, by implication, with their proxies. They have no real leverage over the Houthis or their Iranian backers,” said Hurst.

However, even the leverage on Saudi Arabia was limited for two reasons in particular.

“First, US arms sales will not entirely stop Riyadh’s ability to continue to engage in the conflict. Second, the situation in Yemen is sadly not important enough to the United States for the Biden administration to issue the Saudi government with the kind of ultimatum that might compel them to make peace regardless of their preference,” according to Hurst.

The latter raises the question of what constitutes a conceivable road map towards peace. While there appears to be a theoretical path, the facilitation is another question entirely given to the actors involved.

Hashemi’s suggestion – which concurs with the view of former UN special envoy to Yemen Jamal Benomar that he recently opined in a British newspaper – requires a devoted joint effort.

“A power-sharing agreement is needed among the Yemenis. This must give all the key players a seat at the table, and it must be based on a vision where everyone can have equal access to state resources, political representation, and basic security guarantees,” said Hashemi.

This power-sharing approach would mark a stark contrast to previous propositions.

“Until now, the US-Saudi peace plans have been predicated on Houthi surrender, which is a non-starter for peace in Yemen,” Hashemi noted.

One party, in particular, will hence have to display its proclivity for change.

“In this context, Saudi Arabia is the recalcitrant party in blocking a genuine peace plan for Yemen.”

On the other hand, Iran could potentially be persuaded, albeit, with a caveat, Hashemi suggested.

“I think the Iranians would support a peace effort based on the outline of the former UN special envoy [Benomar]. A fundamental problem here is the absence of US-Iranian diplomatic engagement.”

Whether the encumbrance of antipathy between Washington and Tehran can be overcome could thus be one of the keys moving forward for peace in Yemen.

While the actors involved may or may not initiate genuine negotiations, the civilian population continues to pay the price for the conflict.

According to the UN, the war has cost about 250,000 Yemenis lives so far. Four million people have been displaced, 80 percent of the population depends on aid, and millions continue to starve.

United Nations Secretary-General António Guterres even warned of the world’s worst famine in decades. Moreover, the COVID-19 pandemic caused Yemen’s already weak health system to collapse and forced the country to declare a state of emergency.

The appalling legacy the war in Yemen has produced notwithstanding, it appears noticeably absent from a broader public discourse. While Syria and Libya have somewhat remained in the public’s eye and interest, the horrors in Yemen often remain an afterthought. One could even make a case that the international community’s efforts – besides organising donor conferences – have been rather subpar, considering the recently taken measures in Libya.

The reason is as simple as it is disgraceful: in the ever-complicated world of geopolitics, the humanitarian catastrophe in Yemen lacks standing.

“Yemen is not a key area of interest for the great powers. It has no natural resources, it is a very poverty-stricken country, and its geostrategic position on the map no longer matters,” said Hashemi.

The past six years are a testament to that view.

After a fiery year of cultural outrage against the state of policing in America, President Joe Biden's administration has announced that they have heard the pleas of the people. They will not stand by while a nefarious force maliciously targets the African American...

END_OF_DOCUMENT_TOKEN_TO_BE_REPLACED

Latest interviews of Me

A few new ones in the last week. Despite Afghan withdrawal pledge, US may find new ways to extend the war - Aaron Matè Thought and Conduct - Beto Renteria Biden's Plan to Withdraw from Afghanistan and US Escalation with Russia - The Liam McCollum Show TheAnarchast -...

END_OF_DOCUMENT_TOKEN_TO_BE_REPLACED

Thanks to Everyone's Orphan for the list. Enough Already & Uighurs - Why Libertarian Osama Bin Laden's Strategy to Take Down the US - Bob Murphy Conflicts of Interest #100​ - Scott Horton Dismantles the War Party Narrative Ideological Underpinnings of the War on...