Perpetual war monger Liz Cheney has vowed to defeat Congressman Thomas Massie from Kentucky by actively donating to his challenger Tod McMurtry.  But, Massie has been publishing tweets from McMurtry which show support for Alt-right viewpoints on race which have embarrassed Cheney and forced her to withdraw support for McMurtry.. 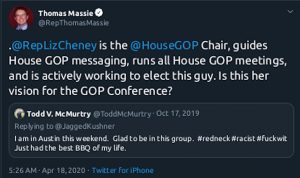 Cheney and other GOP supporters including the Republican Jewish Coalition have pulled support for McMurtry and requested refunds for their donations.

On Saturday, Ms. Cheney said that she asked Mr. McMurtry’s campaign to return her contribution.

“We as Republicans must not condone racism in any form,” Ms. Cheney wrote on Twitter. “Last night I was alerted to tweets by a candidate to whom my political action committee made a contribution. After reviewing the tweets, I asked that the contribution be returned.”

Mr. Massie has long clashed with hawkish Republicans like Ms. Cheney, and he alluded to his disdain for their worldview on Twitter after her donation to Mr. McMurtry and that of Mr. Turner’s became public, writing: “I guess #neocons really do hate coming to work, while expecting nurses and truckers and soldiers to keep doing their jobs. Who knew?”

Congressman Matt Gaetz called out her hypocrisy:  As far as I am concerned, the entire Cheney clan of war profiteers should be in jail. 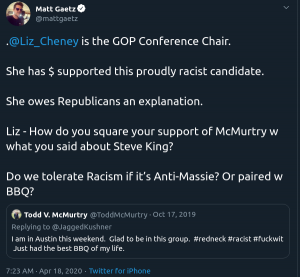