Syria Cheat Sheet: Why the US wants to bomb the Syrian Army

If you’re not yet a Twitter follower of Elijah Magnier @EjmAlrai I suggest you start following him and pay attention to his work right away. He’s one of the few truly “on the ground” war correspondents who regularly treks all over Syria and the region, and has been doing so for decades.

While most of his reporting is in Arabic for Alrai Media based in Kuwait, he does a lot of geopolitical analysis in English via his blog.

The recent White House claim that Syria is preparing a chemical attack against civilians, “including innocent children” (which is remarkably specific!), is beyond bizarre. The administration seems to be using intelligence (though it’s doubtful there’s real intel involved at all) as a kind of public crystal ball to give itself carte blanche authority and justification to attack the Syrian government.

But what’s behind it all? Elijah Magnier has compiled a cheat sheet of sorts based on a fuller blog entry which can be found here. Magnier considers the following essential and obvious questions:

Why would Assad use chemical weapons?

Why the bizarre US accusation that Assad is prepping chemical weapons to massacre his civilian population? 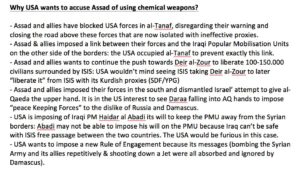 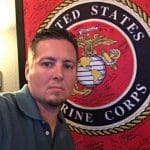