What would foreign policy be in a Joe Biden administration? According to Jonathan Guyer at The American Prospect a Biden administration would consist of Michèle Flournoy at Secretary Of Defense surrounded by a who’s-who of ex-Obama think tankers that represent corporate interests: 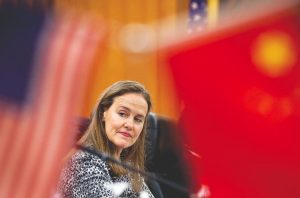 “Flournoy, while consulting, joining corporate boards, and serving as a senior fellow at Harvard’s Belfer Center, had also become CEO of the Center for a New American Security in 2014. The think tank had $48 million on hand, and defense contractors donated at least $3.8 million while she was CEO. By 2017, she was making $452,000 a year.”

“Flournoy also joined the board of Booz Allen Hamilton in October 2018, and it has signed 61 contracts with the Defense Department since. Last year, the role earned her $192,474 ($76,986 as cash, $115,488 in equity). She is on the boards of the artificial-intelligence company SparkCognition, the nonprofit Mitre Corporation, the IT company CSRA, Amida Technology Solutions, and Rolls-Royce North America.”

Don’t expect this group to end many wars and don’t expect Joe Biden to run policy.

“There is no Biden Doctrine. “He’s not a guy who knows history. He’s not a guy who is intellectually curious,” said Emma Sky, who advised the U.S. military in Iraq. “It’s all about personal relationships.” Those close bonds may cloud his judgment. He has expressed “love” for Israeli Prime Minister Benjamin Netanyahu even after he had defied the Obama administration and stood by the late Egyptian President Hosni Mubarak as he assaulted protesters. In effect, Biden’s foreign policy is a blank slate, onto which often-conflicted advisers from the traditional national-security establishment will project actual policies.”

How will they make decisions? This discussion of Yemen is instructive and offers a clue to their priorities.

LAST YEAR, WESTEXEC’S corporate interests and their policymaking at last collided. On January 7, 2019, Tony Blinken and Michèle Flournoy chaired the biannual meeting of the liberal organization Foreign Policy for America. Over 50 representatives of national-security groups gathered in a boardroom at the Madison hotel in Washington. Blinken and Flournoy’s roles with WestExec were not listed on the invitation or on the FP4A website.

The group worked through 24 agenda items, and the last one was “The War in Yemen.” Many Obama diplomats had expressed remorse for enabling Saudi Crown Prince Mohammed bin Salman’s destructive campaign in the Arab world’s poorest country. In 2015, Obama had dispatched Blinken to tell Mohammed Bin Salman that the U.S. supported Saudi Arabia’s right to defend itself and nothing more. But four years later, the U.S., through its arms sales, was party to an ongoing war. The death toll was over 100,000 in an asymmetric conflict, and the defense contractor Raytheon had sold Saudi Arabia more than $3 billion worth of bombs.

Four hours into the marathon policy discussion, many former officials joined progressive advocates in urging an end to weapons sales. The starting point, per FP4A’s agenda, was to “ask Congress to halt U.S. military involvement in the conflict.” Most participants supported cutting all weapons sales, but one person stood apart: Flournoy tried to persuade the group that an outright ban on arms sales to Saudi Arabia wouldn’t be a good idea. Putting conditions on their use was a better compromise, she said, one that defense contractors wouldn’t lobby against, according to two attendees. Flournoy told me she had made a distinction between offensive and defensive weapons, saying that Saudi Arabia needed advanced Patriot missiles to protect itself.

It was an argument she had been making around the capital, but it didn’t resonate among the left-leaning room and didn’t affect the group’s recommendation. To two people present, it sounded like Flournoy was working for Raytheon, which produces Patriot missiles.

Flournoy would not confirm whether WestExec currently works for them. “Raytheon was not being considered as a client at that point,” she said. “When I take a policy position, I do so because I think it is in U.S. interests, and the views I express are solely my own, no one else’s.”

Another WestExec staffer wouldn’t comment on whether the consultancy has Raytheon as a client but would only say the defense contractor is “in the ballpark,” noting they work for a “defense prime,” meaning one of the top five defense firms among which Raytheon ranks. (WestExec’s own Robert Work has served on Raytheon’s board since 2017.)

‘Tell my kids I love them. I’m dead.’ -George Floyd

END_OF_DOCUMENT_TOKEN_TO_BE_REPLACED

Central Banks of course. "In lieu of common sense, however, the guilty will use a whole lot of those impressive sounding words to obfuscate instead of argument, while very much counting otherwise on the favorable rulings of the judge (politicians) who lets this...