“Saving the United States’ soul will require an honest reckoning with post–Cold War U.S. foreign policy and, above all, with the reckless misuse of military power that forms its abiding theme.” 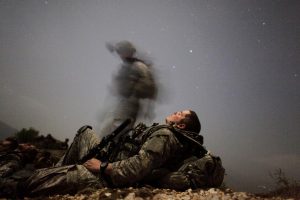 In this year’s presidential election campaign, candidates have largely sidestepped the role of armed force as an instrument of U.S. policy. The United States remains the world’s preeminent and most active military power, but Republicans and Democrats find other things to talk about.

Ever since the end of the Cold War, successive administrations have enthusiastically put U.S. military might to work. In the last three decades, the flag of the United States Army has accumulated 34 additional streamers—each for a discrete campaign conducted by U.S. troops. The air force and navy have also done their share, conducting more than 100,000 airstrikes in just the past two decades.

Unfortunately, this frenetic pace of military activity has seldom produced positive outcomes. As measured against their stated aims, the “long wars” in Afghanistan and Iraq have clearly failed, as have the lesser campaigns intended to impart some approximation of peace and stability to Libya, Somalia, and Syria. An equally unfavorable judgment applies to the nebulous enterprise once grandly referred to as the “global war on terrorism,” which continues with no end in sight.

And yet there seems to be little curiosity in U.S. politics today about why recent military exertions, undertaken at great cost in blood and treasure, have yielded so little in the way of durable success. It is widely conceded that “mistakes were made”—preeminent among them the Iraq war initiated in 2003. Yet within establishment circles, the larger implications of such catastrophic missteps remain unexplored. Indeed, the country’s interventionist foreign policy is largely taken for granted and the public pays scant attention. The police killing of Black people provokes outrage—and rightly so. Unsuccessful wars induce only shrugs.