The State in a State of Tantrum 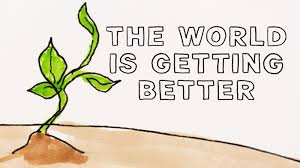 wide, are a wealthier lot than any previous collection of humans that have ever existed upon the planet.

People today are living longer than any previous generation to come before us. A LOT longer.

People today are insanely more literate and connected than any previous set of humans on planet Earth.

People today can be statistically demonstrated to be far more welcoming of humans of alternate ethnicities and far more open to cultures other than their own. Additionally, violent crime rates have been plummeting for decades with no end in sight.

People today survive childbirth and subsequently childhood to a vastly greater degree than children of the past.

The Earth is greener today than it was 100 years ago and getting greener every day!

These blanket statements literally have no end. I can keep making them and probably get 200-300 pages of objective and provable claims similar to the ones above. One can find many studies proving these claims. They’re not even hard to find.

Given that reality you would think humanity might be celebrating. We’re not. I would like to say that we’re unhappier now than ever. I suspect that isn’t true though. Having dove deep in the study of history I’m fully aware of the graven conditions heaved upon the many that came before us.

We are damn unsettled though. Restless. Unfulfilled. Scared. Anxious. Polarized.

Well I don’t know. Some of it may be biological, as indicated here and here.

I heard an observation in a podcast some time ago. Pretty certain it was Jordan Peterson. The observation went something along the lines of outlining the rise of the independent journalists and the avalanche of highly consumed podcasts and programs that followed. Leaving aside subjective judgements of value, it seems obvious that this content creation and consumption has a natural declining impact on the consumption of traditional media sources. Something for which Peterson holds in little regard.

I agree with him.

Obviously, they react and adjust. It’s not always successful or in time nor does it always resonate with an ever-changing consuming public, but they do react.

How does traditional media respond? How else could they? They make any effort at all to gain attention. Views. Consumers. Market Share as a source of advertising revenue. How can they gain extra attention? Well, how does any two-year-old? They resort to their most basic human nature. They get as loud as possible to direct eyes toward their content. How does media get loud, throw a tantrum, scream? They get as inflammatory, abrasive and polarized as they can. No headline is too extreme if it generates clicks and views, right?

I heard Peterson lay out this argument and it resonated with me. It struck me as truth. Something you could intuitively tune in to, witness and even, to some degree, objectively monitor and track over time.

I think this observation correctly informs what is happening in Western politics in 2020 as well. I think the emperor is starkly naked and always has been. I think with the development of worldwide connectivity and the ability for humans to establish trusting relationships with anyone, anywhere, is laying waste to the protective wall that we call government brick by brick.

I think more people are beginning to see that with an increasingly educated global populace we are now educating more engineers and scientists than exist current professional engineers and scientists in the West. These innovators will work hard to appease natural market preferences. There’s no way to stop progress. There’s no evidence to suggest that progress will ever halt.

The definition of progress, over time, certainly changes and creeps, but it still progresses, nonetheless.

I think the State in the West is not blind to this. I think they see diminishing returns relative to their market share. They’ve creeped in scope so greatly that not even a passive tax base can fund their endeavors. Hence an ever-inflating supply of money. (We’ll pay for that soon, rest assured)

How does the State respond? How else could they? They make any effort at all to gain the perception of relevancy. Laws. Regulations. Brute enforcement. Taxes. How do they react? Well, how does any two-year-old? They resort to their most basic human nature. The State throws a tantrum. They get as loud as possible to direct eyes toward anything they can claim as positive outcomes of their actions, regardless of how weak the argument. They get as inflammatory, abrasive and polarized as they can in an effort to attract the attention of those they feel most likely to pay attention. Their “base.” No claim is too extreme if it generates obedience, right?

I think they’re screaming for attention. Anxiously searching for relevancy. Desperately attempting to convince a population waning in confidence of their importance. The danger they want us to believe we all face absent their divine protection.

This isn’t some grand conspiracy of old, white, malevolent men sitting around a dark room with cigars and plotting the destruction of the Earth. These are well-intentioned, albeit sociopathic, humans of all ages and colors who are personally wedded to the success of an archaic and violent system of authority.

In some ways it’s akin to a self-fulfilling prophecy. Candidates on campaign trails get increasingly dramatic and rhetorically divisive for no reason other than to accumulate attention to oneself as a candidate. You can see, track and to some degree measure this reality over time. Mostly all the tales of suffering screamed from the campaign trail are not actually reflective of the experience realized by the actual citizens of any given country. Now that doom and gloom has been professed and “winning candidate” made promises to address, it’s perceived by systems of authority that action needs to be taken. It’s no wonder none of these agencies ever make progress or solve problems. It’s no wonder they tend to create more problems unintentionally than ever existed to begin with.

It’s rather easy to demonstrate that all of the good news shared above has occurred mostly in spite of the existence of nationalistic, violent governments. Nationalism itself was an innovation, progress defined, progress realized. It was a movement away from archaic systems based solely upon the proclaimed divinity of birthright and wedded violent authority to monarchies.

The time had passed for monarchies as humans continued to grow, advance, learn and progress.

I’d love to say that humans will learn to live and love without the existence of coercive authority, though that’s likely not the next step in our journey. However, I am confident, that this next iteration will be at least one degree abstracted and improved upon what we have come to know as national governments.

And that’s progress to celebrate. Little as it may be. We might even be able to realize this evolution without violence. Human progress suggests as much.