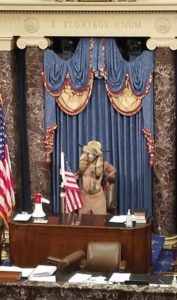 Okay, this was funny though

I’m swamped editing the book, but just a couple quick things about today’s riot at the capitol:

Biden did not steal 5 states. Trump lost. That’s the deal.

Trump’s refusal to concede and long delay before telling people to go home today is a goddam disgrace.

Still, the media claiming this was a coup and an insurrection is overblown. The few who broke in were no armed, organized militia. It was just amped-up mob members acting out. Not a justification, just real context.

The silver lining of the crisis of confidence in America’s rotten institutions is seriously tempered by the fact that the marginalized’s first premise is bullshit. Also the whole thing has a potential of destabilizing relations between Americans in ways that could really be harmful.

If it wasn’t for George W. Centrist Establishment Jr.’s catastrophic presidency there never would have been the disaster of Barack Obama or Donald Trump in reaction to that. The wars, the economic crises, the lockdowns, the blatant lies and corruption of America’s most important permanent institutions has lead us to this. We needed libertarianism. We got neo-liberalism and boy look at the mess we’re in now.