Trump Cancels Secret Meeting With Taliban and President of Afghanistan

President Trump tweeted that a secret meeting with Taliban negotiators and the President of Afghanistan that was supposed to occur at Camp David on Sunday has been cancelled because of the Taliban attacks in Kabul that killed an American soldier.  In his tweet, he states that he has “cancelled the meeting” and “called off the peace negotiations”.  This entire Afghan peace process has been strange from the start.  The US negotiators made it appear that a deal was eminent and only Trump’s signature was required.  Yet the Taliban continued to conduct attacks including suicide bombings in Kabul.  The Daily Beast reported that the Taliban had not agreed to anything.

But Taliban officials and diplomats here in the capital of Qatar, where the talks have been held, told The Daily Beast that after Round 9 last week, there was still no deal the Taliban would sign.

Now we have Trump tweeting this. 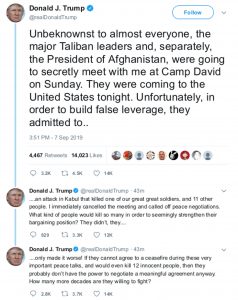