You Call Me Sergeant When I’m Talking To You

Doctor Armen Henderson was handcuffed by Miami police as he was loading health care supplies for the homeless into his van in front of his house.  His crime – disrespect. 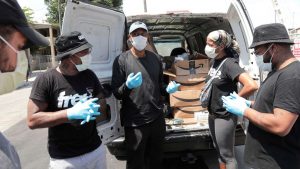 “Dr. Armen Henderson, an internal medicine physician at the University of Miami Health System, said his biggest concern about the up-close encounter was that the Miami-Dade police sergeant was not wearing a protective mask when Henderson says the sergeant got “all up in my face,” Henderson told ABC News on Sunday.

The incident occurred on Friday, just three days after Miami-Dade Police Chief Jorge Colina announced that at least six of his officers had tested positive for the coronavirus and another 125 had been quarantined pending test results. In a video statement, Colina pleaded with the public to help protect his officers, saying, “Please, stay inside, adhere to social distancing, wear a mask or a cloth face covering and be responsible. We’re here for you. Please do your part for us.”

The good Doctor made the mistake of not showing the proper respect towards officer friendly.

We’ve been out there once or twice a week for the last four weeks, handing out tents, toiletries, masks, socks. We’ve been testing individuals for COVID-19 because it’s the most vulnerable population. If you want to control the spread you have to go right to the source and take care of these individuals first,” Henderson said of his work on the streets.”

He said that when he began to walk away from the sergeant, the encounter quickly escalated.

“I’m like, ‘OK, thank you officer.’ And then I turned around to get back to what I was doing,” Henderson said. ”I guess he must have thought that I had disrespected him or something like that. He jumped out of the car and started yelling, ‘You call me sergeant when I’m talking to you, and blah, blah, blah. And, you know what, give me your I.D.”’

“What makes anyone think that government officials are even trying to protect us? A government is not analogous to a hired security guard. Governments do not come into existence as social service organizations or as private firms seeking to please consumers in a competitive market. Instead, they are born in conquest and nourished by plunder. They are, in short, well-armed gangs intent on organized crime. Yes, rulers have sometimes come to recognize the prudence of protecting the herd they are milking and even of improving its ‘infrastructure’ until the day they decide to slaughter the young bulls, but the idea that government officials seek to promote my interests or yours is little more than propaganda—unless, of course, you happen to belong to the class of privileged tax eaters who give significant support to the government and therefore receive in return a share of the loot.”