In this summer special of the Liberty Weekly Podcast, I team up with Robert and Daniel from the Actual Anarchy Podcast for an in-depth discussion and analysis of “Wild, Wild Country.”

“Wild, Wild Country” is a six-part Netflix docuseries which tells the story of Indian guru Bhagwan Shree Rajneesh–a man whose followers attempted to create a commune in the high deserts of Oregon. In doing so, they came at odds with the local townspeople . . . and eventually the US Government.

Since I spent the whole summer studying for the bar exam and moving, this series was the perfect opportunity to open my show to guest hosts. This special series has one analysis episode for every episode of “Wild, Wild Country,” each featuring a different guest host from the liberty podcasting community.

Part I features myself, Robert, and Daniel of Actual Anarchy:

Part IV features Jared and Will of the Peaceful Treason Podcast:

I will return (with a very special guest) for the sixth and final part of our summer special on Wild, Wild Country.

Please be sure to subscribe, rate, and review the Liberty Weekly Podcast on iTunes, Stitcher, Spotify, iHeart Radio, or Google Play Music.

Liberty Weekly Patreon supporters already have received early access to the shows, as well as access to a few hours of show extras and bloopers. Please consider supporting the Liberty Weekly Podcast today.

Check out the series’s landing page at http://www.libertyweekly.net/wwc

END_OF_DOCUMENT_TOKEN_TO_BE_REPLACED 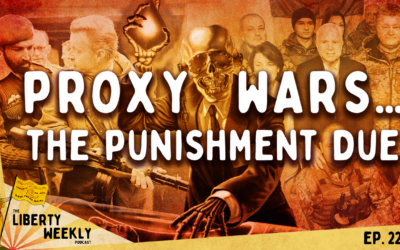