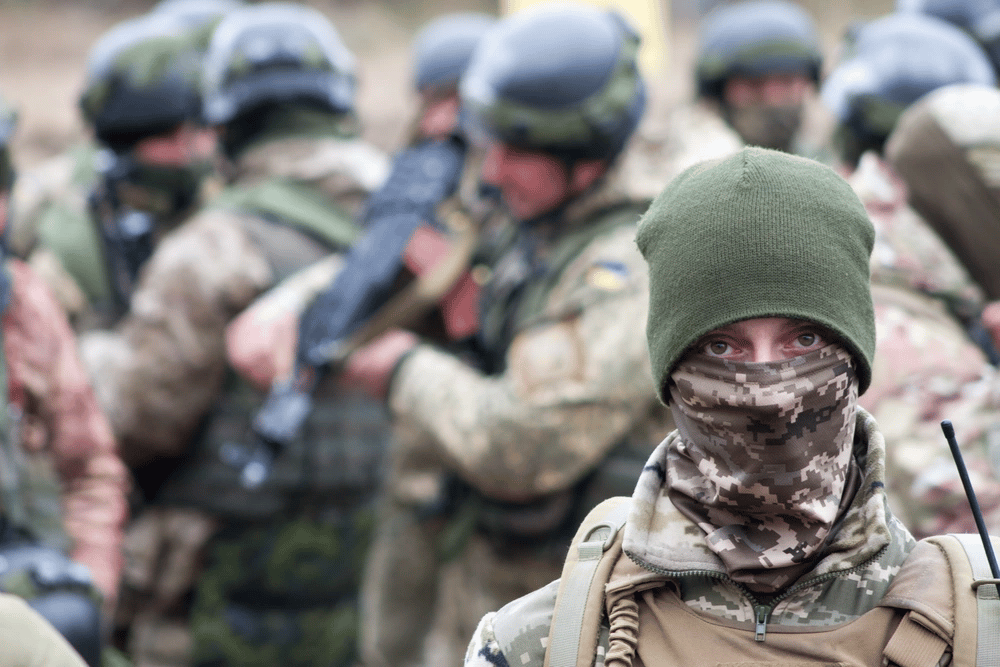 At least 16,000 foreign nationals have volunteered to join an “international legion” created to resist Russia’s invasion of Ukraine, President Volodymyr Zelensky claimed, after Kiev lifted visa requirements for anyone willing to fight.

“Every friend of Ukraine who wants to join Ukraine in defending the country, please come over,” Zelensky pleaded at a recent press conference, adding “We will give you weapons.”

Though the president offered no details on the international fighting force, including the origin of the volunteers, the request comes as Kiev appears to grow more desperate for help in pushing back Russian troops – having already declared martial law and a “general mobilization” of its populace. Those policies include conscription for men aged 18-60 and the commandeering of civilian vehicles and structures, while Ukrainian convicts with military experience are being released from prison to back up the war effort.

Despite the lack of specifics from officials, however, media reports suggest that foreigners from a long list of nations are lining up to enlist.

A Call To Arms

Around 400 Swedes have signed up for the legion, according to the country’s TT News Agency, which cited the group’s coordinator Philip Brannval. The first flight departed Thursday for Poland – thought to be a logistics hub for arms and aid deliveries – and from there the volunteers will enter Ukraine by land, Brannval said.

Czech Prime Minister Petr Fiala, meanwhile, announced on Thursday that the government would not punish those seeking to join up with Ukrainian forces, as the country typically prohibits citizens from serving in foreign armies. Up to 300 Czechs have reportedly vowed to ship out.

Prague, unlike non-aligned Stockholm, is among NATO’s 30 member states.

The Czech government is also now moving to criminalize speech supporting Russian President Vladimir Putin or the Russian invasion. Czech police report that they are already investigating hundreds of people for alleged support for Moscow, with criminal proceedings in nine cases.

A small handful of American, Canadian and German special forces veterans are also set to join the fight, according to interviews by BuzzFeed News. The outlet noted the group – numbering just 10 people in total – is “NATO-trained and experienced in close combat and counterterrorism.” A pair of retired American infantry officers will also fly over to provide “leadership” for the squad, while several other US and Canadian citizens also told Reuters they intend to answer Zelensky’s call.

Canadian Foreign Minister Melanie Joly told reporters over the weekend that Ottawa would leave the decision to fight up to individual citizens. The US State Department, however, continues to urge Americans to avoid travel to Ukraine amid the hostilities.

Like Canada, the UK’s Foreign Secretary Liz Truss said she would “support” British nationals heading out for Ukraine, but added, “that is something that people can make their own decisions about.” Speaking with Insider, two UK vets said they intend to join the Georgian National Legion, which has close ties with Kiev and has clashed with Russian-speaking fighters in the break-away Donbass region.

“Since the UK parliament has said that we’ll back anyone that goes, that’s kind of like the UK government giving anyone a green light to go and help,” one veteran told Insider.

Japan, a close partner with the West, has also seen at least 70 citizens volunteer, among them 50 veterans of the country’s Self-Defense Forces and two from the French Foreign Legion. However, Ukraine’s Japanese Embassy stressed that any candidates must have military experience or, at minimum, “specialized training.” Tokyo, too, has warned against travel to Ukraine.

Having received requests from “several veterans” on how to join the international brigade, the Military Times has published a step-by-step guide for those looking to face down Russian troops. Kiev’s British Embassy, meanwhile, also offered advice, telling volunteers to fill out an online form before taking a flight to Poland, where it said they would receive additional instructions.

It remains unclear who will command the foreign force, whether they will receive training before deployment, or how long they will be expected to serve.

An unspecified number of fighters are also arriving from neighboring states such as Georgia and Belarus, the Washington Post reported. Citing a Chechen activist in Ukraine, war correspondent Elijah Magnier said “two battalions” of Chechen fighters are already on the ground in the country and prepared to resist the Russian advance. The unconfirmed report comes after Chechen leader Ramzan Kadyrov – a close ally to Putin – said he mobilized thousands of troops to fight on behalf of Moscow.

Russia, for its part, has warned of stiff consequences for any foreign nationals looking to support Ukraine, vowing to criminally prosecute any fighters captured while arguing that international rules for POWs would not apply to them.

“None of the mercenaries the West is sending to Ukraine to fight for the nationalist regime in Kiev can be considered as combatants in accordance with international humanitarian law or enjoy the status of prisoners of war,” Russian Defense Ministry spokesman Igor Konashenkov said Thursday, as cited by Tass.

The droves of foreign fighters pouring into Ukraine are reminiscent of Afghanistan in the 1980s – when countless militants from across the region lined up to battle the Red Army – and more recently Iraq, Syria and Libya. In the latter cases, those willing to travel and fight were largely ideologically motivated and often far more brutal than the local opposition forces.

In the meantime, current and former US officials, such as ex-Secretary of State Hillary Clinton, have made vocal calls to arm up a Ukrainian “insurgency,” suggesting Washington and its allies send weapons and gear to “volunteers” while making a direct comparison to the Soviet invasion of Afghanistan. A deluge of weapons shipments has already begun to flow.