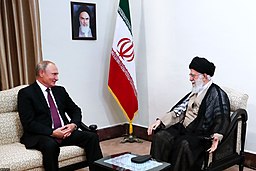 Tehran presented Moscow with an unnamed European leader’s proposal for a “peace initiative” to end the war in Ukraine, Iran’s Foreign Minister Hossein Amirabdollahian confirmed on Wednesday, according to a report in Al Jazeera.

During a news conference in Moscow with his Russian counterpart Sergey Lavrov, Amirabdollahian announced he has provided the Russians with a European leader’s proposal that had been given to Iranian President Ebrahim Raisi. “There are ideas to help establish peace and stop the fighting in Ukraine, and I shared these ideas with Mr. Lavrov,” Amirabdollahian added.

While further details about the proposal are unknown, Iran’s top diplomat said that it deals with prisoners of war and southeastern Ukraine’s Zaporizhzhia Nuclear Power Plant (ZNPP). The Russian controlled plant, Europe’s largest, has been the sight of constant shelling during recent weeks. Moscow blames Ukraine for the attacks and Russian President Vladimir Putin recently told his French counterpart Emmanuel Macron the shelling could cause a “large-scale catastrophe.” Putin and Macron agreed that the UN nuclear watchdog, the International Atomic Energy Agency (IAEA), should visit the plant as soon as possible.

While Ukraine accuses Russia of being behind the shelling, it makes little sense for Moscow to attack the plant and tempt nuclear disaster when the Russians have controlled the ZNPP and the surrounding areas since March. This week, the IAEA mission arrived in Zaporizhzhia and the inspections should begin soon. The Russian side is confident the mission will find evidence proving Ukraine is the responsible party.

After the August 19 call between Putin and Macron regarding the ZNPP, their first in three months, the two agreed to “speak about this subject again in the next few days following discussions between the technical teams and before the deployment of the mission.”

The Al Jazeera report added that, since the war began, Tehran has repeatedly passed along messages between Moscow and Kiev. However, this is the first publicly known instance of the Iranians delivering a message from Europe. Tehran blames NATO’s aggressions for provoking the war with Russia and maintains that the conflict must end through dialogue.

In June, a French presidency official told Reuters Paris would like to see the US return to the Joint Comprehensive Plan of Action (JCPOA), the Iran nuclear deal, saying “there is a knot that needs to be untied if applicable … to get Iranian oil back on the market.”

Signatories to the 2015 deal included the P5+1:  Washington, Moscow, Beijing, London, Paris, plus Berlin. In 2018, the Donald Trump administration illegally withdrew Washington from the deal and reimposed sanctions. A US return to the deal would  see sanctions lifted on Iran as well as enable Europe to again purchase Iranian oil. The continent is facing soaring energy prices as a result of the Washington-led sanctions against Russia. This is one of the main motivations behind EU foreign policy chief Josep Borrell’s campaign to save the deal.

A recent article in Foreign Affairs written by Fiona Hill and Angela Stent, which cites “multiple former senior US officials,” confirms Lavrov’s earlier claims that Moscow and Kiev had tentatively agreed on workable peace deal during bilateral talks in March. Negotiations between the two sides were being held in Istanbul at the end of March.

According to Hill and Stent, the outlined terms were “Russia would withdraw to its position on February 23, when it controlled part of the Donbas region and all of Crimea, and in exchange, Ukraine would promise not to seek NATO membership and instead receive security guarantees from a number of countries.”

Talks have collapsed since then largely due to Western pressure on the Ukrainians epitomized by UK Prime Minister’s April 9 visit to Kiev. Speaking for the “collective West,” Johnson reportedly told Ukrainian President Volodymyr Zelensky that “even if Ukraine is ready to sign some agreements on guarantees with Putin,” Kiev’s NATO benefactors were not. Johnson is said to have told Zelensky now is the time to pressure Putin and Moscow. The British readout of a subsequent call Johnson held with Macron said that, while in Kiev, the UK leader had “urged against any negotiations with Russia.”

Thus far, the sole diplomatic success to come out of the entire conflict has been the deal to export grain from Ukraine’s heavily mined ports. The agreement came out of negotiations between Kiev and Moscow which were brokered by the UN and Turkey. The US played no role in the talks and has abandoned diplomacy with Russia.

Secretary of State Antony Blinken cut off talks with Lavrov more than a week before the war even began and has spoken to him, only on the phone, for a grand total of 25 minutes since then. Their one conversation was related to a bilateral prisoner exchange, the war was not discussed apart from some vague threats Blinken issued.

On April 5, the Washington Post reported that for “some in NATO, it’s better for the Ukrainians to keep fighting, and dying, than to achieve a peace that comes too early.”