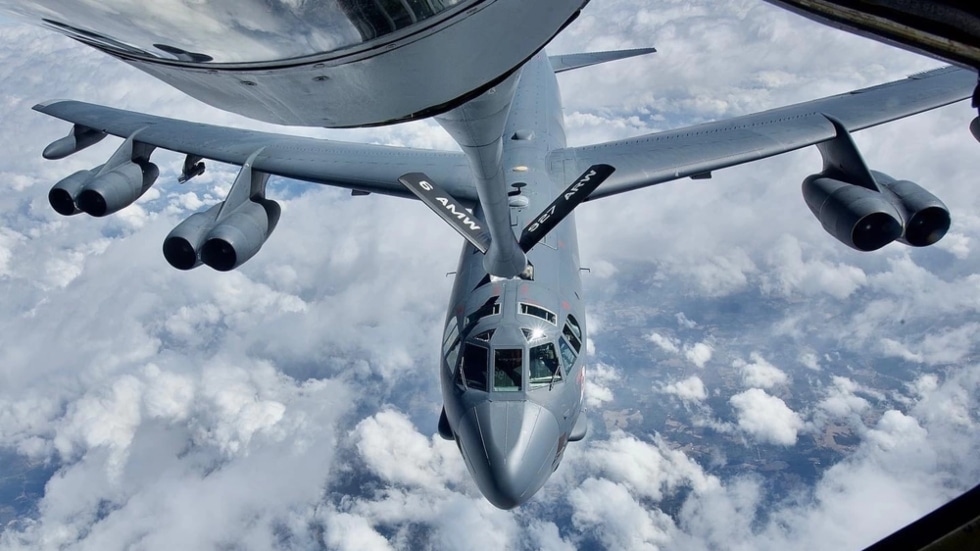 FILE PHOTO: A US KC-135 tanker craft refuels a B-52 Stratofortress near the Barksdale Air Force Base, Louisiana, February 26, 2021. (Credit: US Air Force / Tiffany A. Emery)

The war games, dubbed “Steadfast Noon,” will begin Monday and run through the end of October. Belgium is hosting the exercises which will take place over the North Sea and the United Kingdom. Some American aircraft will take off from bases in North Dakota.

According to a NATO press release, “Exercise ‘Steadfast Noon’ involves 14 countries and up to 60 aircraft of various types, including fourth and fifth-generation fighter jets, as well as surveillance and tanker aircraft. As in previous years, US B-52 long-range bombers will take part.” It added, “as long as nuclear weapons exist, NATO will remain a nuclear alliance.”

This year’s nuclear drills come as tensions between NATO and Moscow are at a multi-decade high. Moscow has accused the alliance of waging war against Russia in Ukraine. Washington has led its allies in providing Kiev with tens of billions in weapons, as well as intelligence and training, to kill Russian soldiers.

NATO Secretary-General Jens Stoltenberg stated it would send the “wrong signal” to cancel the war games. “It would send a very wrong signal if we suddenly now canceled a routine, long-time planned exercise because of the war in Ukraine. That would be absolutely the wrong signal to send,” he said on Tuesday.

Stoltenberg argued that going through with nuclear war games is the best way to prevent nuclear war. “NATO’s firm, predictable behavior, our military strength, is the best way to prevent escalation.” He continued, “if we now created the grounds for any misunderstandings, miscalculations in Moscow about our willingness to protect and defend all allies, we would increase the risk of escalation.”

As Western military support for Ukraine has increased, the Kremlin has issued a warning that it would respond. Recently, Russian President Vladimir Putin said he would defend Russian territory with the full arsenal at his disposal. While pushing forward with nuclear war games, Stoltenberg slammed Putin’s statement as “dangerous and reckless.”