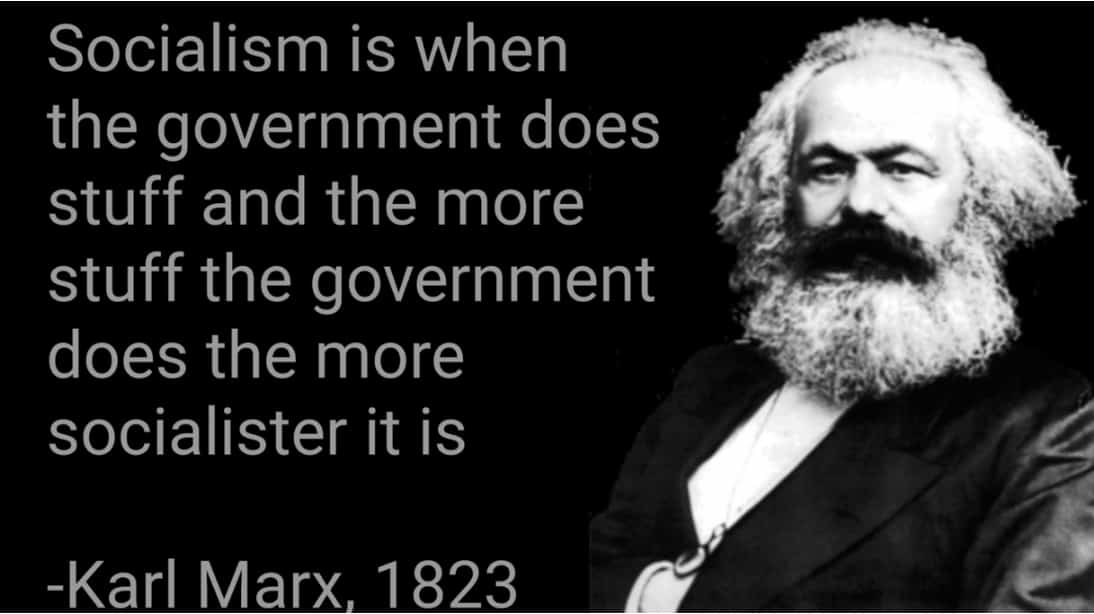 Of course, that is too honest to be a real Karl Marx quote.

It is a popular meme that is used to mock the allegedly misguided view of many who oppose socialism. It has been famously paraphrased by prominent socialist, Richard Wolff.

“Socialism is when the government does stuff; and it’s more socialism the more stuff it does; and if it does a real lot of stuff, it’s communism.”

These comments were made sarcastically, as socialists do not believe that “government doing stuff” accurately sums up their ideology. I intend to argue that it does.

Let me be clear: I am not proposing an alternate definition of socialism. The definitions that socialists and communists give themselves usually line up with the standard definition you can find in dictionaries and encyclopedias, and I am not going to stray from that standard definition. Instead, I will argue that their definition is synonymous with “socialism is when the government does stuff”—whether they acknowledge it or not.

For an analogy, imagine I said that I want a hollowed out half sphere made of wood (with a slightly flattened bottom so that it will stand still on a table) in which I plan to put fruit. You sum this up by saying that I want a fruit-bowl. I can protest and say that you’re putting words in my mouth, but what I described simply is a fruit bowl, and you’re not committing any kind of straw-man fallacy by telling me that.

Here is the first dictionary definition of socialism that comes up on Google: “a political and economic theory of social organization which advocates that the means of production, distribution, and exchange should be owned or regulated by the community as a whole.”

The Wikipedia definition is a little more elaborate but amounts to the same thing: “Socialism is a political, social, and economic philosophy encompassing a range of economic and social systems characterized by social ownership of the means of production, as opposed to private ownership.”

This renders socialism as somewhat self-contradictory. “Ownership” is inherently individualistic. If you tell me that more than one person owns something then you have not told me whose decisions take precedence with regards to that thing, and so you have not really told me who owns it until you name an individual.

You might argue that some things are owned by more than one person all the time. For example, joint-stock companies. However, a joint-stock company is not owned by multiple people in a literal sense. Instead each share in the company is owned by a different individual. When you buy a share in a company you are not buying the company itself, you are buying the right to a vote in whatever system of decision making the company has, as well as a right to dividends and various other benefits.

Perhaps that is really what is meant by “social” or “community ownership”—that each individual in a community is born owning a “share” in the relevant property. This “share” grants him various, yet limited rights over that property.

Once it reverts to “the community,” how is each individual in the society supposed to express his share of this “ownership?” The obvious answer is to take a vote, but what system of voting? First past the post? Approval voting? Instant runoff? Can you sell your vote? Who should be given the vote? Everyone over 18? 21? Should convicted felons be allowed to vote? Remember that every additional person accepted into the system dilutes your ownership.

Lines can be drawn, but by whom? Whoever gets to decide the rules by which “the will of the community” is determined with regards to a certain piece of property could arrange those rules such that his will is carried out, and is therefore the true owner of that supposedly “community owned” property.

Furthermore, it is unlikely that everyone will vote on every use of everything. More likely, they will elect representatives to act on their behalf. We started by saying that the whole community owns the capital goods, but in the process of clarifying what that means, we have ended up with ownership by whoever has political power. You may have noticed that we have for some time now been describing government ownership.

Many socialists, especially those who fancy themselves “anarchists,” will say that their democratic collective is not a government. However, it is a political structure with the power to expropriate property from anyone within its territory and which is imposed on you with or without your consent. If you don’t call that a government, then you are simply playing word games.

However, that is exactly the basis upon which the government that you almost certainly live under acts.

You might be tempted to say that your government doesn’t act in the best interests of the community, but that is beside the point. They may not make good decisions for the people in their jurisdiction, but they still derive their perceived legitimacy from the idea that they are carrying out the wishes of the community as a whole.

If you doubt this, consider the fact that supporters of the government will refer to government run services as “public” and anything run by anyone else as “private” (for example, government run schools are often called “public schools,” while schools run by anyone else are called “private schools”). Also, consider the political rhetoric used to justify the existence of government; it is almost certainly something like “the government is the democratic will of the people” or “the people have implicitly agreed to this government.” Finally, consider the mere existence of democracy; that is a system in which the government’s actions are determined by community vote, which is exactly what socialists propose as legitimate expression of the will of the community.

Furthermore, all government services must be produced by “means of production.” By taking any action, the democratically elected representative of the people is taking control of the means of production in accordance with what they see as the will of the community. In other words, everything the government does is socialism.

Hypothetically, one can conceive of a non-socialist government. Perhaps in an absolute monarchy, the government may draw justification from the divine right of kings, and be controlled exclusively by a monarch—with no community input, save what that monarch decides to take into account. Such a government does not act as the “will of the people,” rather God himself has allegedly ordained the king to rule, so whatever he says, goes.

However, almost no modern country operates on that basis—even nominally. Instead, governments are almost universally seen as the representative of the will of the community as a whole. When the government enacts a regulation, bans a drug, builds a road, hires a teacher, drops a bomb, levies a tax or runs a PSA, everyone from the average voter to the politicians themselves see it as justified because the state is a representative of the people via democratic election. Assuming we’re talking about a modern country, government means socialism.

It is necessary to reiterate that this is not to say that government actions are really in line with the “will of the community” (there is no “will of the community,” there are only the different and conflicting wishes of different people, and a political system which at best will approximate the wishes of a large number of them). Nor is it to say that any of these decisions are actually of any benefit to the community. That would be beside the point. Socialism done badly is still socialism. If it weren’t, nothing would be socialism.

Communism is just the extreme form of socialism. The Communist Manifesto describes it this way: “the theory of the Communists may be summed up in the single sentence: Abolition of private property.”

This could either mean distinguishing “private” from “public” as “non-government” vs “government” explicitly, or it could mean that we are distinguishing them as “individually owned” vs “community owned.” However, as discussed, the latter is either meaningless, or means setting up a government as a representative of said community. Either way, it means government.

“Abolition of private property” means that nothing will be owned by private individuals. While socialism is the transfer of some property to the government, communism is the transfer of all property to the government.2Communists will usually try to distinguish between “private property” (means of production) and “personal property” (everything else) but this changes little. If we are only talking about a subset of property then only that subset need be socialized before we reach communism. Once again, this is not how communists explicitly define their ideology, but the way they do define it is effectively equivalent.

In other words, socialism is when the government does stuff, and if it does a real lot of stuff, it’s communism.

Danny Duchamp creates essays and videos on philosophy, economics and politics from a consequentialist libertarian perspective. He is best known for his video outlining a practical defense of anarcho-capitalism. His work has been published by The Mises Institute, The Libertarian Institute, and at his own website, dannyduchamp.com.