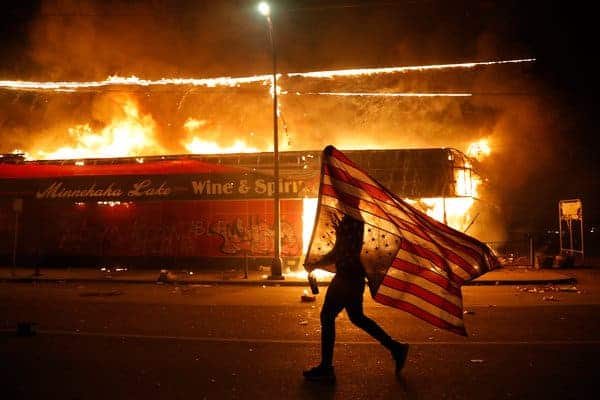 It doesn’t have to be this way

America is burning. Quite literally. The most destructive riots in America in a very long time have hit more than two dozen cities, as opportunistic thieves and arsonists hijack massive peaceful protests and acts of peaceful civil disobedience sparked by the senseless murder of a man named George Floyd by Minneapolis police on May 25. The riots are a tragedy not just for those who have lost or been hurt – a few were even shot during a protest in Louisville, Kentucky on Friday – but for the protesters’ cause which is their righteous anger at unaccountable police violence running rampant through our society. The enemy is the state, but the rioters only make others feel grateful for the enemy’s protection. What is the sense in destroying the property and endangering the lives of innocent people? There is no sense in it, it’s mob-action stupidity and will almost certainly guarantee that the “great silent majority” of Americans continue to side with the “thin blue line” against them.

Even worse it provides the excuse for the further use of emergency tactics by police and could end up being cited to put the U.S. military on American streets. Already at least eight cities have declared curfews and almost one-third of American states have called out the national guard. The president has threatened to send in U.S. army forces as well. So much for limiting abusive police power.

And such limits are long overdue. Please go sign up for the afternoon email alert from the Free Thought Project site. You will see that every single day – virtually with no exceptions ever – Americans are killed by police. In a major proportion if not majority of these cases, the cops’ violence is obviously completely unwarranted. For example, Austin police murdered an innocent man just the other day. Note, as always, the local media spin on behalf of the cops against an innocent dead citizen, “officer-involved,” “shoot at.” There are thousands more.

Take the case of Breonna Taylor, a young, heroic EMT, slain in her own home by Louisville police on a paramilitary SWAT Team night raid on the wrong home, looking for evidence of supposed contraband violations by a man who had already been taken into custody in another location. For weeks the cops, in conspiracy with the compliant local news, smeared the innocent dead young woman as a “suspect” and her boyfriend as an attempted murderer of the heroic police. In fact, the boyfriend, Kenneth Walker, was the brave hero as well as innocent victim in the situation. These cops, pretending to be Navy SEAL Team 6 at war, did not announce their identities as police as they smashed down the door with a battering ram. Walker shot one officer in the leg. The cops then all opened fire, hitting Ms. Taylor 8 times, killing her.

Listen to the 911 call. After the cops apparently temporarily withdrew, Walker called the police for help, still unaware that it was the police who had committed the murder. Weeks later, after the story finally achieved wide publicity, the charges against Walker were dropped. Just another case of collateral damage in the tragedy-farce of the war on drugs.

It isn’t just the drug wars. America’s militarized war on guns is the same way. Even when not killed in paramilitary night raids like what happened to a young man named Duncan Lemp in Maryland last month, tens of thousands of Americans, maybe more, mostly poor and racial minorities, have been captured and locked in cages like animals not for using a firearm in any criminal way, but simply for having one when the state had commanded otherwise. Of course the alleged possible presence of firearms at a suspect’s location is the primary excuse for the use of deadly paramilitary teams in “no-knock” raids in the first place.

Another major problem beyond prohibition is the doctrine of “qualified immunity” for all law-enforcement officers, which after having been invented out of whole cloth by activist judges, has now evolved into an almost-blanket protection for murderous cops, serving as a license to kill and an always-get-out-of-jail-free card. For you to kill there must be no choice. For them it must only be “reasonable.” And reasonable means whatever they say. The suspect made a “furtive” movement! Blast him! He reached to pull up his sagging pants – “waistband!” Dead man. Two weeks paid vacation. Cops can even outright steal money from innocent people and the judges serve only as their accomplices. When they murder their own loved ones while off the clock, their partners only cover for them.

The same right-leaning patriots who are railing against police enforcement of the Covid lockdowns have got to ask themselves how they would feel if a cop did this to their father.

Minneapolis Police kill a black man on 38th and Chicago.

He is screaming, “I can’t breathe” as police drive their knee on his throat for over three minutes. pic.twitter.com/1hhBLAqy8K

And what if it was almost certain they would all get away with it too?

In this case the cop who had his knee on Floyd’s neck, Derek Chauvin, has actually been fired and arrested, but only after the massive outcry, and almost certainly because of it. Even then, Chauvin, the cop seemingly most-responsible out of the three who were holding Floyd down, was only charged with little-old third-degree murder which carries a light sentence even if he’s convicted, which is unlikely anyway. The prosecutors had every incentive to “do something” like arrest him now to calm people down, but they also have every incentive to botch the case and let the killers all go free later on. In the charging documents the accusers themselves open up reasonable doubt in the form of autopsy results that say it was not damage to Floyd’s neck that killed him, indicating that it was the prone position of the victim as well as pressure to his back that made the difference instead. While far less than reasonable doubt, with the other men not charged, it’s almost certainly enough wiggle room for a cop to squeeze through.

The rest of America should try look past the stupidity and destruction of the riots in response to police violence and demand a serious change now. We need an end to all drug and gun prohibition, a permanent ban on all SWAT Team night raids, to shutdown the military’s 1033 and Homeland Security’s militarization of local police programs and federal militarized Joint-Task Forces, and most of all we need a massive new consensus to force the Supreme Court to overturn their made-up, Old World-style, qualified immunity doctrine. If government is above the law, then it is not law at all, only edicts of tyrannical men.

This is an emergency. These changes must be made immediately.

In the midst of all the virus, lockdown, police state and economic crises, take note, this society is in no position whatsoever to impose its “benevolent empire” on the rest of the world. We’re still a million miles from perfecting our own union. If it is to hold together at all, factions will need to do a better job learning to see things from others’ point of view. If no one can agree on what is to be done, let us then at least agree on what to stop. Roll back this government and let freedom reign instead. There’s no need to fight over our differences if we can be free to maintain them.