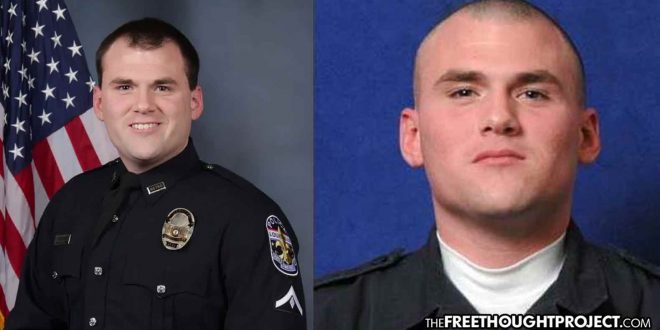 As TFTP has reported, since 2017, information over a years-long child abuse saga involving Louisville Metropolitan Police Department (LMPD) officers has slowly trickled out, leading to multiple officers being arrested and sentenced to prison. Hardly an isolated incident, in total, a series of seven lawsuits names more than eight current or former LMPD officers. One of those officers—who was subsequently arrested for child sex abuse—was officer Brad Schuhmann, 32.

Despite horrifying details coming out in the case against Schuhmann, he was granted a sweetheart plea deal in which he will avoid jail for sexually abusing a little girl in the department’s explorer program.

According to his indictment, Schuhmann willfully deprived the victim of liberty without due process of law, which includes the “right not to have her bodily integrity violated by a person acting under color of law.”

Nevertheless, Schuhmann was sentenced by U.S. District Judge Rebecca Jennings Grady on Wednesday to just six months of home confinement and two years of probation, the Courier Journal reported. He must also register as a sex offender.

The victim called Schuhmann a “monster” and a “predator” in an impact statement and said “this man robbed me of my goals.”

As the Courier Journal reports, identified only as “Jane Doe,” she said she has lived in shame since Schuhmann had sexual contact with her when she was a teenager in the now-defunct scouting program for youngsters interested in law enforcement.

Schuhmann did not deny the sexual abuse and instead admitted to having sexual contact with her at her home and other locations. He said he has since changed since that incident, which he called “the worst decision of my life.”

Schuhmann becomes the third cop in this child sex scandal to be convicted. It has taken years to make such a small headway as the department has been helping to cover it up.

As TFTP reported, inside information into the years-long child sex abuse saga was not at all easy to obtain and now we know why. The department hid 738,000 records documenting the sexual abuse of Explorer Scouts by officers—and then, according to records requested by the Courier Journal, lied to keep the files from the public.

According to the Journal, the newspaper requested all records regarding the sexual abuse of minors by LMPD officers involved in the Explorer program, a program for children who are interested in becoming cops. However, police claimed that they couldn’t turn over the records, telling the Journal that they had already been turned over to the FBI.

“LMPD does not have possession or control of the records,” LMPD records custodian Alicia Smiley wrote in a Sept. 3, 2019, letter to Assistant Attorney General Marcus Jones. “When the investigation was taken by the FBI, all copies of the investigative materials … were physically removed from the premises, digital devices and servers of LMPD.”

But that was a lie, the LMPD had hundreds of thousands of records on child sexual abuse by officers in the Explorer program.

According to the Journal, the department still had at least 738,000 records, which the city allowed to be deleted.

The records detail the actions taken—or rather not taken—when the department learned about the sexual abuse of children in the program.

“I have practiced open records law since the law was enacted 45 years ago, and I have never seen anything so brazen,” said Jon Fleischaker, an attorney for The Courier Journal. “I think it an outrage.”

Another lawyer for The Courier Journal, Michael Abate, said the city’s conduct was especially egregious given the case involves the sexual abuse of children by police officers and the department’s failure to prevent it.

Metro Council President David James said, “it’s very disturbing to me that either the county attorney’s office or the police department was so dead-set on making sure those records never reached the public.”

Councilman Anthony Piagentini, R-19th, said, “There aren’t the appropriate words to describe how indefensible this is. The administration oversaw the sexual exploitation of minors and then deleted evidence.”

Jean Porter, a spokesman for Mayor Greg Fischer, said his “focus is getting to the truth in this horrific case.”

But what does the truth matter when the abusers avoid jail for their actions?

When confronted about being caught in a lie, the department and the city issued a statement “amending previous factual statements made in error.” But attorneys for the paper are not buying it.

“They intentionally put them out of reach,” Abate added.

The two former LMPD officers in the Courier’s investigation have already been convicted of serious crimes, as The Free Thought Project reported, and the city, with good reason, wanted to know more about how police handled the complaints from parents and reports children were being groomed, propositioned, and even raped.

Brandon Wood…allegedly raped a teenage boy, both in [his] car and in a residence, and filmed the crime for the purposes of producing pornography. [Kenneth] Betts and Wood were police officer mentors in the Youth Explorer Program for kids who want to one day become law enforcement officers. It was inside the mentorship program that they are accused of finding their victims.

It is important to point out that none of these charges would have happened had the victims not sought out lawsuits as the department had no interest in pursuing their own—allowing this abuse to go on for years.

The original accusations were followed by lawsuits with one lawyer reportedly representing five victims abused by officers inside the Explorers program. Now, that number has jumped to 15 victims.

Not only did parents accuse the police officers’ superiors of doing nothing about their criminal complaints, the Police Officers’ union also began to stonewall, filing a lawsuit in an attempt to prevent investigators from interviewing more cops. As TFTP reported:

Just as the investigation into alleged sex scandals involving teenage explorers and Louisville police officers was progressing, the police union stepped in and filed a lawsuit to prevent at least three other officers from testifying in the case. The River City Fraternal Order of Police (RCFOP) filed a lawsuit mid-August to prevent the officers from incriminating themselves in the involuntary interviews with a private attorney hired at the request of the mayor’s office. Officers Matthew Gelhausen, Joseff Keeling and Paul Paris were protected from being forced to give a deposition to the lawyer as a result of the lawsuit filed by their union.

Harvey was paid $140,000 to compile the report and released his findings, which took a year to complete. His team concluded that was there were indeed mistakes made in handling the criminal complaints. According to the Courier’s investigation, these mistakes may have been on purpose.