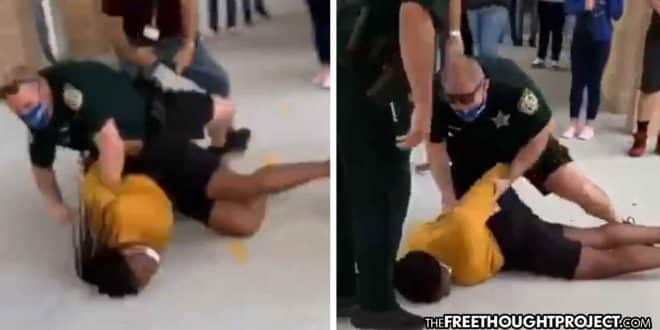 School resource officers, particularly in Florida, always seem to be in the news for abusing or otherwise causing grave harm to the children they are allegedly sworn to protect. In case after infuriating case we’ve seen Florida cops cower behind a wall while children were murdered in a school to sexually assaulting the children they are tasked with protecting, to beating up small girls and even handcuffing and arresting 6-year-old children. Another one of these incident unfolded this week as a school resource officer was seen body-slamming a high school girl in an attempt to break up a fight—knocking the girl unconscious in the process.

The incident took place at liberty high school in Osceola County. The video was posted to Twitter with the following description:

This is liberty high school in Osceola county and I’ve seen my share of body slams from that school not only by officers but from Deans as well. I’ve seen grown ass man hop on top of girls to hold them down while they are clearly in distress.

The video is hard to watch as it shows the massive officer grab the girl in a full nelson before violently smashing her head into the pavement, putting all his weight on top of her. The girl hits head first and is immediately knocked out. Her head hit the pavement which such force that it made an audible thud that was picked up on the video.

According to the sheriff’s office, the incident took place between classes as the officer was attempting to stop the student from fighting another student.

Two videos were posted with one of them showing that the “fight” the officer was breaking up, appeared to be over or not happening at all by the time he arrived.

Demeatra Bodie, whose son is a Liberty High School Student who witnessed the incident, told WFTV that the video left her speechless.

“I was like, What in the world? I have to do something…I can’t just let this go,” adding that she thinks the cop who did this should be in jail.

“If we were to do something like that to our kids, we will be in jail,” Bodie says. “No questions asked…we’re going to jail until they figure it out.”

The video has gotten so much attention that even Hollywood actor Jamie Foxx weighed in.

“What in the absolute phuck?!! Slam a girl to the concrete after you’ve already subdued her??!! What kind of heartless shit is that??!! Someone s daughter??! WTF? cowards,” Foxx tweeted.

The department has been tight-lipped so far and has only released the following information about the incident at the school, saying they are “investigating” it.

Today the sheriff’s office received information from school officials at Liberty High School about a video posted on social media depicting one of our School Resource Officers in a confrontation with a student. The incident appeared to take place between classes in the hallway. In the video, it shows the deputy taking the student to the ground and placing handcuffs on her.

Our office is in the initial stages of our investigation. We are collecting video, witness statements, and relevant information related to the incident. We know that the School Resource Officer was in the process of trying to stop the student from fighting another student in the hallway when the deputy took her into custody. Once we receive more information related to the incident, we will provide an updated press release.

The officer has not been named either.

Below are the two videos. Warning, they are graphic.

This is liberty high school in Osceola county and I’ve seen my share of body slams from that school not only by officers but from Deans as well. I’ve seen grown ass man hop on top of girls to hold them down while they are clearly in distress. pic.twitter.com/wyePuKVqqZ

Update: allegedly one of the officers name and possibly the officer seen in the video hurting the girl is allegedly Deputy Fournier.