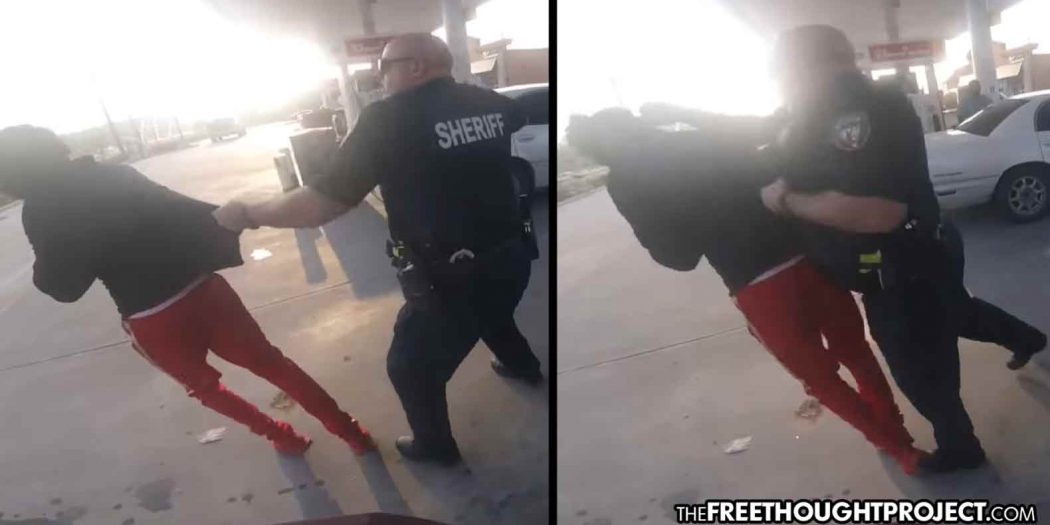 On the day he was attacked by those he has been told are their for his protection, high school sophomore, Carlos Rodriguez had committed no crime, was not suspected of committing a crime, and was simply being a kid. However, his innocent, compliance with officer orders, and his young age were no defense against the brutal and despicable actions of Harris County sheriff’s deputy Bert Dillow.

The incident originally took place on March 26 and despite video evidence capturing the unprovoked assault on a child, Dillow remained a deputy for over a month and was only just fired last week. He has yet to face any charges.

Video of the incident was published by the immigrant civil rights group FIEL last week, who issued the following statement:

We are deeply troubled by the events we have witnessed on the chilling video. And there are more questions than answers after seeing the video. What led to the sheriff acting so violently? Why was Carlos targeted to begin with? And why is this officer still in law enforcement, when we have seen that he has been involved in other ‘incidents’ with people of color. We want answers for our community and the Rodriguez Family who after this violent encounter have been left fearing for their son. No young child should be treated and intimidated in this manner. We are tired of seeing incidents like this and we must do everything in our power to make sure that these events don’t happen to anyone else. Our community deserves answers, our families deserve answers, and most importantly Carlos deserves answers.

As the video shows, Rodriguez is sitting on an ATV at a gas pump when Dillow walks out of the gas station with a coffee in his hand. For some reason, Dillow targets the teen and begins verbally berating him and demanding his identification.

Rodriguez fully complies and gives the officer his ID but this wasn’t enough. Dillow begins manhandling the skinny teenager, who was half his size, and when Rodriguez steps away to avoid being hurt by the officer, all hell breaks loose.

“Don’t run from me, boy. I’ll beat your f**king a** right here,” Dillow says as he grabs Rodriguez by the shirt. “Turn around and put your hands behind your back before I beat the s**t out of you.”

“Don’t be f**king stupid,” Dillow yells as he cocks back his arm and delivers a haymaker punch to the child’s face, sending Rodriguez crashing to the ground and fulfilling his promise to “beat the sh*t out” of the teenager.

The massive cop then positions his 300 pound body on top of the teen in an effort to dish out several more punches to his head.

After the violent and unnecessary arrest, Dillow was originally placed on desk duty and for nearly 5 weeks the department “investigated” his actions. Amazingly enough, his firing didn’t come until after the video was released publicly.

In a statement over the weekend, the sheriff’s office announced their decision:

Deputy Bert Dillow was terminated on April 28 following an Internal Affairs Division investigation into a video posted on social media that showed a use-of-force incident involving a juvenile male. The investigation began March 29 and Deputy Dillow was placed on administrative duty on April 1.

The Sheriff’s Office Administrative Discipline Committee reviewed the investigation’s findings and determined policies regarding the following activities were violated: Conduct Prohibited, De-Escalation and Response to Resistance (Use of Force), and Reports.

Dillow can, and likely will, appeal his termination as per the Sheriff’s Civil Service procedures.

As you watch the video below, imagine for a moment that the person attacking an innocent child was anyone but a cop. Had an angry civilian walked up to a child at the gas station and began beating the hell out of him, that person would be sitting in jail. But because Dillow—who has a history of excessive force—had police officer status, he has yet to be charged with a crime.