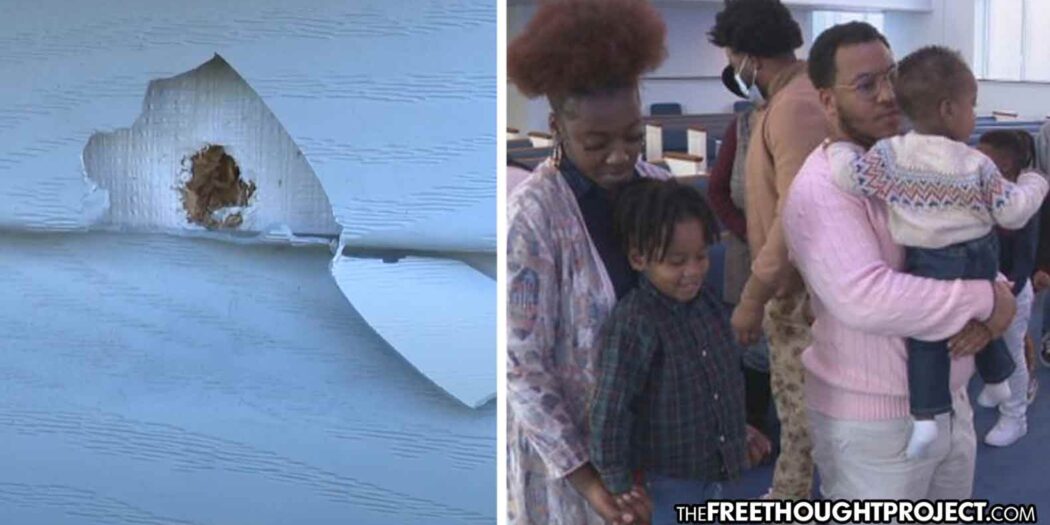 Corey Marioneaux Jr., 24, is a father of two, church-going husband with no criminal record. So when he heard his front door getting smashed in last week just before 5 a.m. as he slept in his bed, the last thing going through his head was, “it must be the cops, I’ll just act completely defenseless with my wife and children in the house.” Instead, he did what any father and husband should do and defended himself.

Unfortunately for Marioneaux, it was the cops and defending his family from them has landed this innocent father in jail, facing many years behind bars.

Luckily, during the early morning raid in which police used a battering ram to break through Marioneaux’s front door and storm into his living room, no one was killed. Had this father of two actually killed one of the intruders, however, he would have been justified in doing so.

Though police claimed they “knocked” for ten seconds at his front door, most people are still asleep at this hour, so it is quite easy not to hear them. What’s more, criminals can and have posed as police to carry out crimes, so yelling “police” doesn’t necessarily put someone at ease who is trying to protect their family.

Though the knocking didn’t wake him, when his door was smashed in with a ram, Marioneaux immediately jumped up, grabbed his pistol and defended his family. He would fire one shot at the armed intruders breaking into his home and luckily, his shot was deflected by one of the officer’s shields.

Police fired back and luckily they missed as well. As soon as Marioneaux realized the intruders were cops, he put the pistol down, put his hands up, surrendered, and immediately apologized. No one was hurt.

As it was clearly a mistake to fire on the officers, Marioneaux should have been released immediately. Yet he wasn’t. Instead, he was booked for Attempted Murder of a Law Enforcement Officer.

As for the warrant police claim to be serving at his home, they haven’t told the public what it was for. Pensacola Police have only called it a “high-risk search warrant” part of an ongoing investigation. TFTP looked up the arrest records for Marioneaux and he has just one pending charge, for shooting at the officers — meaning he wasn’t charged with anything in regard to that suspicious warrant. Helping to further muddy the waters for Marioneaux’s case is the fact that Pensacola cops don’t wear body cameras because it “could reveal their tactics.” So, it’s his word against their word.

Highlighting the lack of concern over Marioneaux’s arrest, however, is the fact that his bail—for allegedly attempting to murder a cop—was set at just $50,000 and he was released almost immediately. Marioneaux’s family and friends are now speaking out.

“He wasn’t a convicted felon, he wasn’t a person of interest,” Marcus Lett, a relative of Marioneaux, told WEAR.

“He’s licensed to carry a firearm, they took his weapon,” Lett said. “They know he’s licensed, so why go through these extremes to press these charges when anyone would’ve done the same thing to protect our home and our family? We can’t stand idly and watch someone that we know—without a doubt in our minds—don’t deserve what’s been given to him. The narrative that has been painted is not this individual.”

“The young man—once he found out it was the police, he laid down the weapon, he came out with his hands up,” Marioneaux’s paster, Pastor LuTimothy May said. “So that lets you know this isn’t an aggressive cop killer that wouldn’t do harm to anyone.”

Hopefully for Marioneaux and his family, this case is thrown out immediately. There is absolutely no reason to ruin this seemingly upstanding citizen’s life over militarized police tactics gone awry.

Such was the case for Andrew Coffee IV who was arrested for the exact same thing, also in Florida. In 2017, Coffee attempted to save he and his girlfriend’s lives by firing at multiple home invaders who crashed into his bedroom window in the middle of the night.

In November 2021, he was finally acquitted after a jury found that he acted in self-defense. As for the cops who murdered his girlfriend, none of them faced any consequences.

This paradigm of no-knock raids on non-threatening people has to end. In the last month alone, cops have executed two people—who were not the subjects of the warrants they were serving—during no knock raids. It must stop.

“How can we move forward to make sure this doesn’t happen to an innocent man that’s out there doing the best he can to raise his two children and love his family and be a productive citizen in society?” Pastor May said. “That’s what the message is right now.”

And if things are going to change, that message must be loud.