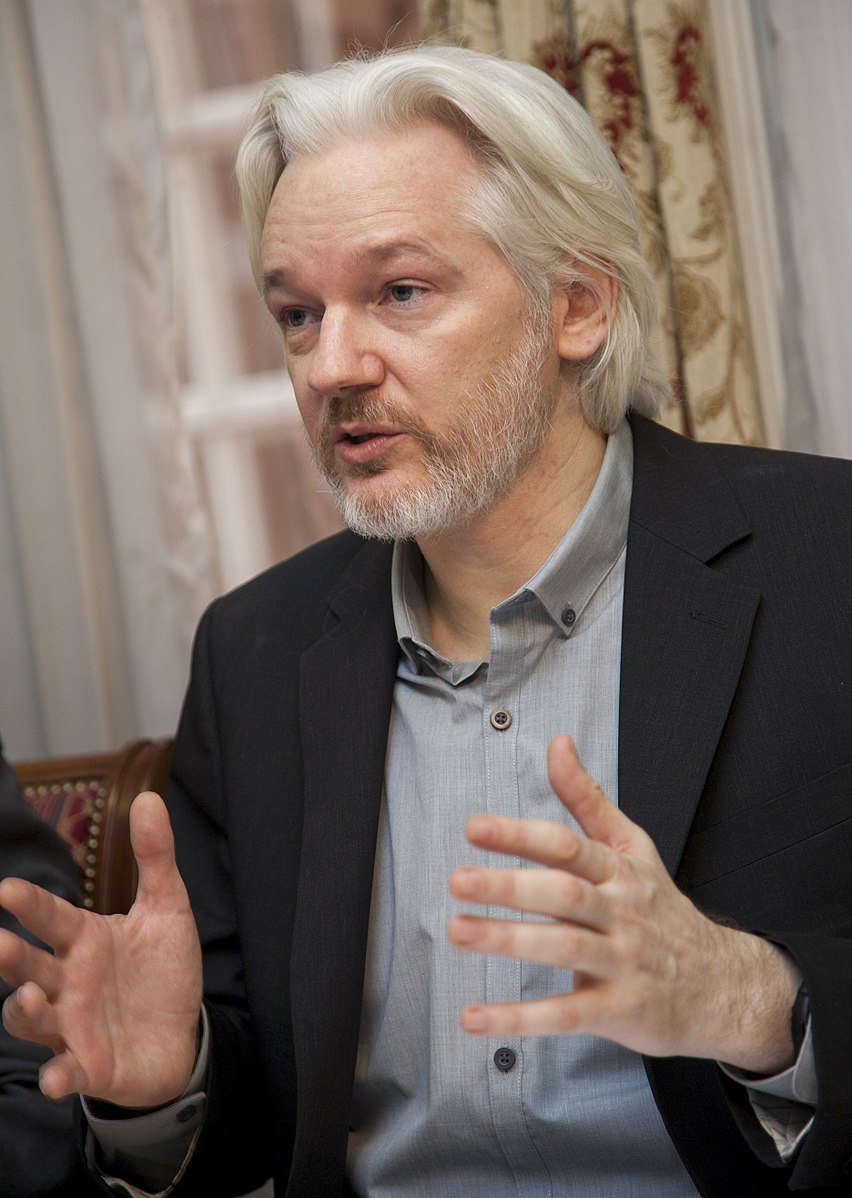 Julian Assange sits in a jail cell today after being betrayed by the Ecuadorian government and his home country of Australia. A British judge named Michael Snow has found the WikiLeaks founder guilty of violating bail conditions, inserting himself into the annals of history by labeling Assange “a narcissist who cannot get beyond his own selfish interest.” So that tells you how much of a fair and impartial legal proceeding we can expect to see from the British judicial process on this matter.

But the real reason that Assange has been surrendered by the Ecuadorian government, imprisoned by the British government, and ignored by the Australian government is not directly related to any of those governments, but to that of the United States of America. An unsealed indictment from the Trump administration’s District Court for the Eastern District of Virginia, accompanied by an extradition request, charges Assange with “conspiracy to commit computer intrusion for agreeing to break a password to a classified US government computer” during Chelsea Manning’s 2010 leak of government documents exposing US war crimes.

This charge is premised on a fraudulent and manipulative distortion of reality, and you may be one hundred percent certain of it. Let me explain.

You can be absolutely certain that this charge is bogus because it isn’t based on any new information. The facts of the case have not changed, the information hasn’t changed, only the narrative has changed. In 2010 the United States opened a secret grand jury in Virginia to investigate whether Assange and WikiLeaks could be prosecuted for the publication of the Manning leaks, and then-Attorney General Eric Holder announced that the Obama administration was conducting “an active, ongoing criminal investigation” into the matter. The Trump administration has not turned up any new evidence that the Obama administration was unable to find in this active, ongoing criminal investigation (US government surveillance has surely acquired some new tricks since 2010, but time travel isn’t one of them), and indeed it does not claim to have turned up any new evidence.
“There’s a huge myth being misreported about today’s indictment of Assange,” journalist Glenn Greenwald tweeted today. “The claim that Assange tried to help Manning circumvent a password to cover her tracks isn’t new. The Obama DOJ knew about it since 2011, but chose not to prosecute him. Story on this soon.”

“Holder chose not to prosecute Assange based on the same info Trump DOJ cited,” Greenwald added.

“The weakness of the US charge against Assange is shocking,” tweeted NSA whistleblower Edward Snowden. “The allegation he tried (and failed?) to help crack a password during their world-famous reporting has been public for nearly a decade: it is the count Obama’s DOJ refused to charge, saying it endangered journalism.”

This is all information that the Obama administration had access to (journalist Tim Shorrock observed that the alleged 2010 correspondence between Assange and Manning “looks like it came straight from NSA surveillance” of the two), yet it chose not to do what the Trump administration is currently doing because it would endanger press freedoms. This means that nothing has changed since that time besides (A) the fact that there is now a more overtly tyrannical administration in place, and (B) the fact that the public has been paced into accepting the prosecution of Assange by years of establishment propaganda.

Last year, after it was revealed that the Trump administration was seeking Assange’s arrest, Greenwald wrote the following:

“The Obama DOJ – despite launching notoriously aggressive attacks on press freedoms – recognized this critical principle when it came to WikiLeaks. It spent years exploring whether it could criminally charge Assange and WikiLeaks for publishing classified information. It ultimately decided it would not do so, and could not do so, consistent with the press freedom guarantee of the First Amendment. After all, the Obama DOJ concluded, such a prosecution would pose a severe threat to press freedom because there would be no way to prosecute Assange for publishing classified documents without also prosecuting the New York Times, the Washington Post, the Guardian and others for doing exactly the same thing.”

Nothing has changed since 2010 apart from a more thoroughly propagandized populace and a more depraved US government, which means that this new charge that the Trump administration issued in December 2017 is based on nothing other than a diminished respect for press freedoms and an increased willingness to crush them. This makes it fraudulent and illegitimate, and the precedent that is being set by it should be rejected and opposed by everyone in the world who claims to support the existence of a free press which is capable of holding power to account.

So what are we left with? We’re left with the US government filing criminal charges against a journalist(and Assange is indisputably a journalist) for protecting his source and encouraging his source to obtain more material, both of which are things that journalists do all the time.

“While the indictment against Julian Assange disclosed today charges a conspiracy to commit computer crimes, the factual allegations against Mr. Assange boil down to encouraging a source to provide him information and taking efforts to protect the identity of that source,” said Assange lawyer Barry J Pollack in a statement today. “Journalists around the world should be deeply troubled by these unprecedented criminal charges.”

“There are parts of the indictment that are clearly designed to criminalize things journalists routinely do,” Greenwald told CNN. “Part of the accusation is that [Assange] encouraged Chelsea Manning to provide him with more documents than the original batch that she gave him, which is something that as a journalist I’ve done many times with my sources, that journalists do every day. They say ‘Oh thanks for this document, maybe you could get me this?’ They also say that he helped her to essentially cover her tracks by giving her advice about how to get this information without being detected. The only thing in the indictment, and it’s very vague, is a suggestion that he tried to help her circumvent a password; it didn’t seem to be successful, but it’s unclear whether that was designed to get documents or to simply help her cover her tracks. But either way it’s clearly a threat to the First Amendment, because it criminalizes core journalistic functions.”

In an article for Rolling Stone titled “Why the Assange Arrest Should Scare Reporters“, journalist Matt Taibbi writes that “The meatier parts of the indictment speak more to normal journalistic practices.”

“Reporters have extremely complicated relationships with sources, especially whistleblower types like Manning, who are often under extreme stress and emotionally vulnerable,” Taibbi writes. “At different times, you might counsel the same person both for and against disclosure. It’s proper to work through all the reasons for action in any direction, including weighing the public’s interest, the effect on the source’s conscience and mental health, and personal and professional consequences. For this reason, placing criminal penalties on a prosecutor’s interpretation of such interactions will likely put a scare into anyone involved with national security reporting going forward.”

The Espionage Act has not at this time been employed to prosecute Assange as many have speculated it might, and the computer crimes he’s been charged with carry a maximum sentence of five years. But this does not mean that further far more serious charges cannot be added once Assange is imprisoned on American soil, especially after his guilt in the Manning leaks has been made official government dogma following the conspiracy conviction.

“In my opinion this charging Assange with a lower-level crime (not espionage) is a trick that would allow the UK to extradite him to the US with ‘no threat of capital punishment’ only to have US prosecutors do what they always do: pile on charges,” tweeted Daniel McAdams of the Ron Paul Liberty Report, referring to assurances sought by the UK and Ecuador that Assange would not face the death penalty if extradited to the United States for the conspiracy charge.

Either way, this is a cataclysmic threat to press freedoms, and the time to act is now. The US government’s arbitrarily gifting itself the right to use fraudulent distortions to imprison anyone in the world who publishes facts about it will chill any attempts to do so in the future, and poses a far greater threat to press freedoms than anything we’ve seen in our lives. Anyone who sits idly by while this happens is signing over the sovereign right of every human being on this planet to hold power to account, and anyone calling themselves a journalist who does anything other than unequivocally oppose this move is confessing that they are a state propagandist. This is an intolerable plunge toward Orwellian dystopia, and is an assault on human dignity itself.

It’s time to shake the earth and refuse to let them cross this line. Enough is enough.

Caitlin Johnstone is an independent, antiwar blogger and author who covers foreign policy issues on her reader supported site. Her work can be found at CaitlinJonhstone.com