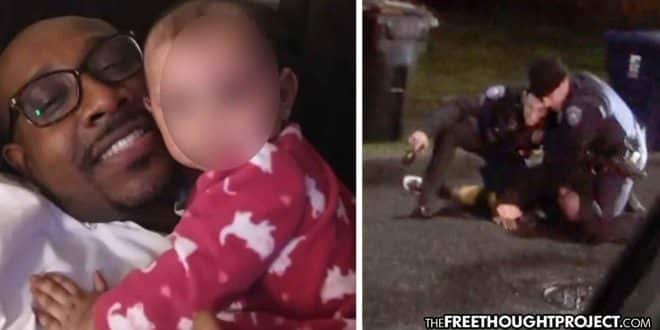 For months after her brother Manuel Ellis’ death in police custody, Monet Carter-Mixon fought for answers. She was told that her brother who is a father of two and active member of his community’s church, randomly attacked two cops and was subsequently killed while doing so. But Carter-Mixon didn’t believe the official story and set out on a mission to expose the cops who killed her brother. It worked.

According to police, on March 3, 2020, Ellis had been at church all night playing drums with the church band before he was killed. He then went to his mother’s home afterward before going to a 7-Eleven to get a late night snack on his way home.

As he walked home with his box of donuts and a bottle of water, he would cross paths with two Tacoma cops, Christopher Burbank and Matthew Collins, who were sitting in their patrol car.

Police claimed that without provocation, Ellis suddenly attacked them, punching the passenger side window of their cruiser. Collins and Burbank then claimed that when they got out to confront Ellis, the 33-year-old father attacked them.

Months after Ellis’ death, the Pierce County sheriff’s investigation was coming to a close and the officers involved were about to be cleared. But Carter-Mixon was still fighting.

During a protest for George Floyd in her town, Carter-Mixon tried to raise awareness for her brother’s death which happened right there and not in another state. As she walked around with pictures of her brother, she found a needle in a haystack.

“A person came up to me and said, ‘I know somebody who saw what happened,’” Carter-Mixon said, according to the Seattle Times. That person was Sara McDowell who filmed the incident. After getting that cellphone video from McDowell, Carter-Mixon discovered another video from a ring doorbell camera nearby.

Carter-Mixon had done in days what an entire sheriff’s department couldn’t do in months—she found evidence of what happened — and it contradicted the “official” investigation.

Prosecutors said witnesses described the initial encounter between Ellis and the two officers as peaceful and respectful. But as Ellis began to walk away, witnesses said Burbank abruptly swung open the car door, hitting Ellis from behind and knocking him to his knees, according to prosecutors, and that Burbank then got on top of Ellis as he tried to stand up. What happened next was captured on cellphone videos, a doorbell camera and dispatch radio traffic, according to the probable cause statement.

Prosecutors said Burbank wrapped his arms around Ellis, lifted him into the air and drove him back down onto the pavement while striking him with one of his fists. Collins then moved in toward Ellis and brought his weight down onto him. With Ellis underneath him, Collins hit his head with his fist several times, according to the probable cause statement.

Ellis’ only actions appeared defensive in nature as he tried to shield his face from police. Prosecutors would admit that he never fought back, and never struck the officers.

Instead of realizing they were killing Ellis, one of the officers then tells him to “shut the f–k up, man.”

For several minutes, Burbank and Collins would punch and squeeze the life from Ellis until a third officer, Timothy Rankine showed up and joined in. Rankine applied further pressure to Ellis’ back as officers hog tied Ellis and put a spit hood over his head. According to prosecutors, the spit hood is not supposed to be used on people with trouble breathing. Ellis had told officers dozens of times that he could not breathe. In fact, his last words he would speak on this planet were, “I can’t breathe.”

Nevertheless, Ellis was left face down and hog-tied with the spit hood on his head for nine minutes. When paramedics arrived, Rankine refused to allow them to remove the restraints from Ellis, claiming he would start fighting again. But Ellis was already dead.

By the time they paramedics convinced the cops to remove the restraints, they were unable to revive Ellis and he was declared dead on the scene.

The Pierce County medical examiner later ruled Ellis’ death a homicide due to “hypoxia,” or a lack of oxygen, caused by physical restraint.

Because Carter-Mixon relentlessly fought to clear her brother’s name, Burbank and Collins were both charged with murder and Rankine was charged with first-degree manslaughter. This marks the first time in the history of the state that the Washington State Attorney General has criminally charged officers with unlawful use of deadly force.

Predictably, the Tacoma Police Union defended the killer cops, saying “facts were ignored in favor of what appears to be a politically motivated witch hunt.”

“We look forward to trial,” the union said in a statement. “An unbiased jury will find that the officers broke no laws and, in fact, acted in accordance with the law, their training, and Tacoma Police Department policies. An unbiased jury will not allow these fine public servants to be sacrificed at the altar of public sentiment.”