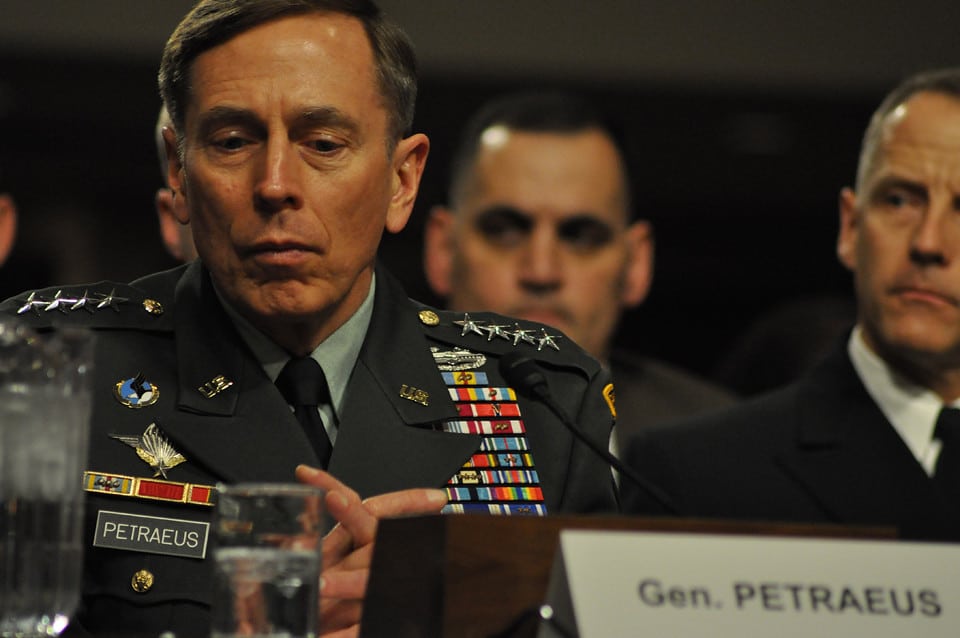 In a recent article for The Atlantic David Petraeus came to the conclusion that American soldiers should still be in Afghanistan today. Two thousand, three hundred twenty-four American servicemen killed, $2.3 trillion dollars and over 20 years later convicted criminal and adulterer David Petraeus concludes “In essence, then, from the beginning through to the end—but especially at the end—American commitment was lacking.” Petraeus made vague statements regarding the success he achieved while in command of American forces in Afghanistan. He referred to what he believes the American decision makers should have done differently while rarely offering details.

David Petraeus seems to still believe that his counter insurgency (COIN) strategy was a successful and just needs more time, perhaps even a “generational commitment.” He maintains that during his time in command he took on the issue of corruption without offering any specific details of how he solved the problem. The Special Inspector General for Afghanistan Reconstruction’s (SIGAR) report on Stabilization Efforts seems to contradict his account. The American Military and USAID poured billions of dollars into what were sold as public works projects. The SIGAR report states “The elite capture of relationships with, and aid and contracts from, the coalition, created new grievances and exacerbated old ones as some tribes and other groups benefited from the war, while others were alienated and driven toward the insurgency.” With little knowledge of the history or intricacies of the areas in which they were deployed American forces sought to work with the people that seemed the friendliest to their operation without knowing the historical implications of giving one tribe or family more power over the other. Petraeus repeatedly mentioned his supposed success in Iraq but failed to mention the collapse of the Iraqi army in 2014 in the face of an ISIS assault.

Petraeus enumerates a few specific instances that could have been done differently. In one, he writes,

“We also did not always deliver what the Afghan military needed or should have had. Instead, we gave them what we thought they needed and, under pressure from the U.S. Congress, we sought to buy American, even when U.S. systems, such as our helicopters, were too complex for the Afghans to maintain. Had we helped the Afghan military along a path where it acquired less complex (typically non-American) equipment we might have built it into a more sustainable fighting force, but one that remained nearly as capable and would have been more able to operate independently of us.”

Is it realistic to think that any American Congress would not be so captured by the military industrial complex as to forgo giving their patrons in the arms industry billions of dollars and instead buy Russian made equipment for the Afghans? Would any U.S. General with thoughts of a spot on Raytheon or Lockheed’s board of directors would make such a request?

Petraeus goes on to argue that the Americans should have given the Afghan government’s military more Russian made helicopters, that the Afghans were able to maintain, to support their troop movements and air cover across the country. For three years I worked on the Department of Defense contract to maintain the Russian made Mi-17 helicopters for the Afghan Army’s Special Mission Wing. I saw no indication that the Afghan forces were capable of maintaining this fleet of MI-17 helicopters with which they had much more experience. Throughout my three years on this contract I saw the Ukrainian subcontractors shoulder the burden of keeping the MI-17 fleet mission capable. The Afghan military mechanics would routinely disappear for long stretches of their work day. When they would work they would make sure to leave the most difficult and labor intensive jobs to the Ukrainian mechanics to complete. They quickly learned that the contractors were judged on how mission ready they could keep the fleet and not on how well the Afghan mechanics were capable of doing the job themselves. There were Afghan civilian subcontractors, often the sons of well-connected government officials, working on all facets of the program. They were proficient in their jobs. These Afghan subcontractors would not be a long term solution for the maintenance of the fleet because after two years they became eligible for the Special Immigration Visa and were off to live in the United States.

Petraeus is critical of the Trump Administration’s deal with the Taliban to completely withdrawal from the country. One of his many ridiculous criticisms, “Throughout, but particularly in the final few years of our involvement in Afghanistan, we also repeatedly failed to appreciate the damaging effects of our stated desire to leave on the psyche of Afghan political and military leaders and those in the rank and file.” After the deal was signed I never saw any indication that the Afghan contractors and soldiers or even the long time American contractors actually believed that the US military was going to completely withdrawal. There was a constant state of denial that in the end the Americans would stay and the money and easy paychecks would continue to flow. It was not until the Biden administration’s announcement confirming the withdrawal that the Afghan forces suddenly had an urgency to learn their jobs.

Petraeus falsely claims that, “The timeline that had the US withdrawing during the height of the fighting season was a major mistake.” The deal called for the withdrawal to be complete by May of 2021. It was the Biden administration the foolishly and unilaterally delayed the withdrawal to September 11th, 2021 for no apparent reason with fatal consequences. The Taliban almost assuredly had planned their countrywide assault to begin after the Americans were gone and refused to alter it after Biden’s fateful decision.

When making his case for why the Americans should have remained in Afghanistan he mentioned that American soldiers were in little danger because they were no longer on the front lines. However in Afghanistan there were no clearly defined front lines and our supposed allies were often our enemies. Pfc. Brandon Jay Kreischer, 20, of Stryker, Ohio, and Spc. Michael Isaiah Nance, 24, of Chicago were murdered in July of 2019 by an Afghan National Army soldier that was supposed to be an ally of the Americans. Their deaths should not be written off.

There were no doubt true warriors among the SMW soldiers. Col. Karim Rahimi was a brave man that risked his life countless times for his countrymen. I witnessed the sadness of his family a friends when his body was brought back to Kabul for burial after days of searching after he was piloting a helicopter that was shot down. In three years countless bodies were piled into ambulances that were always waiting to greet the latest return flight from a battle. In the end these men were betrayed by the leadership of their government and the American generals and politicians that promised American soldiers would always be there to die with them.

Not one more American soldier should die in Afghanistan. It is a tragedy that thirteen more American servicemen were murdered during the final days of the withdrawal. These Americans would still be alive were not for political inaction and the failed plans and strategy of generals from the same mold as Petraeus. In a healthy and honorable culture Petraeus would be condemned to forever beg the forgiveness of every family that had a son, father, or brother die trying to execute his failed counter insurgency strategy.

Sgt. Shane McCarver served in the United States Army from 2013-2017. He worked as a logistics analyst on the DOD contract maintaining the MI-17 helicopters and the PC-12 fixed wing aircraft of the Afghan Air Force and Afghan Army Special Mission Wing from November 2018 until July 2021. He has since found honest work as a shipping coordinator for a manufacturer in Newport, New Hampshire.