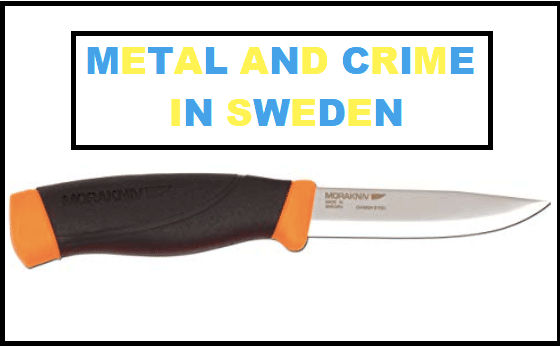 As the #GunControlNow battle rages on online, between two camps that won’t listen or understand each other, and where both sides are throwing emotionally loaded words in each other’s virtual faces, I’d like to give a couple of cents on a different, but closely related issue: Knife crimes in Sweden.

At an Ikea-store in the middle of Sweden, August 10, 2015, a mom and her son gets stabbed to death – Sending a shock wave through not only the city of Västerås where the deed was done but also on comment sections on social media. The weapon of choice for the murderer? A knife from the store. The focus of the story was the nature of the murderer and the murder: Immigrant that got denied a stay and was to be transferred over to Italy, where he already got asylum.

Frustrated, he decided to pick victims at random and do the deed. As this was the part of the story that got the most attention, the knife crime itself was just added to the statistics, a number that’s constantly ticking up. The Swedish comedian Betnér accidentally made a meme that follows him even today, 4 years later, in his response video to the Ikea-murders: “Sweden has never been safer“. This phrase is constantly used ironically every time a crime is reported on in Swedish social media-circles, especially if the perpetrator is an immigrant.

The stories behind the statistics matters: If we can’t interpret the number and understand the patterns, it is very hard to put in solutions for real life, or change the patterns.

In the #GunControlNow debate that is happening over in the United States, one side emphasizes the headlines, the stories, while the other leans heavily on statistics. Both are needed to get the whole picture but nobody seems interested in this and are more interested in a screaming contest instead. In Betnér’s case its even weirder: He was trying to make up his own story, parallel to the ongoing one, and based it on a feeling that he was right and believed he said the right things for his specific target audience: A swing and a miss, later and Swedish Redditors got themselves a new dank meme.

England, or more specifically London, has always been seen as the eye of the knife-crime storm of Europe. Infamous for its machete-wielding population and pickpockets that slice handbags off women’s shoulders, I had a picture of the United Kingdoms as the land of the bladed weapon in modern Europe. Turns out I was wrong. [1]

England and Wales’s population are 5.8 times bigger than Sweden, but only had 2.5 times more knife crimes reported than Sweden back in 2015 – It is very hard to do a cross-country comparison like this and its never going to be exact in any way since laws and policing are different, but its quite curious that there is such a big difference between population size and knife crimes. It doesn’t paint the whole picture, but it tells us something.

While the Swedish government suggests raising the punishment for carrying a knife on your person (carrying a knife is forbidden in all public spaces, including in your car) as a solution to the increasing knife-crimes, because they only look on the dramatic numbers and have no clue about the story (an ironic contrast to the American gun-debate in mainstream media).

Innocent victims to crime don’t even have the option of having defensive weaponry on their person in Sweden, that’s a privilege for police officers only. A perpetrator getting a few months more in jail or being fined a few hundred Kronor more for having a blade in their pocket is helping victims how?

[1] Statistics from BRÅ (For Sweden, English text) and BBC News (For UK and Wales)

Reprinted with permission from Utopium.