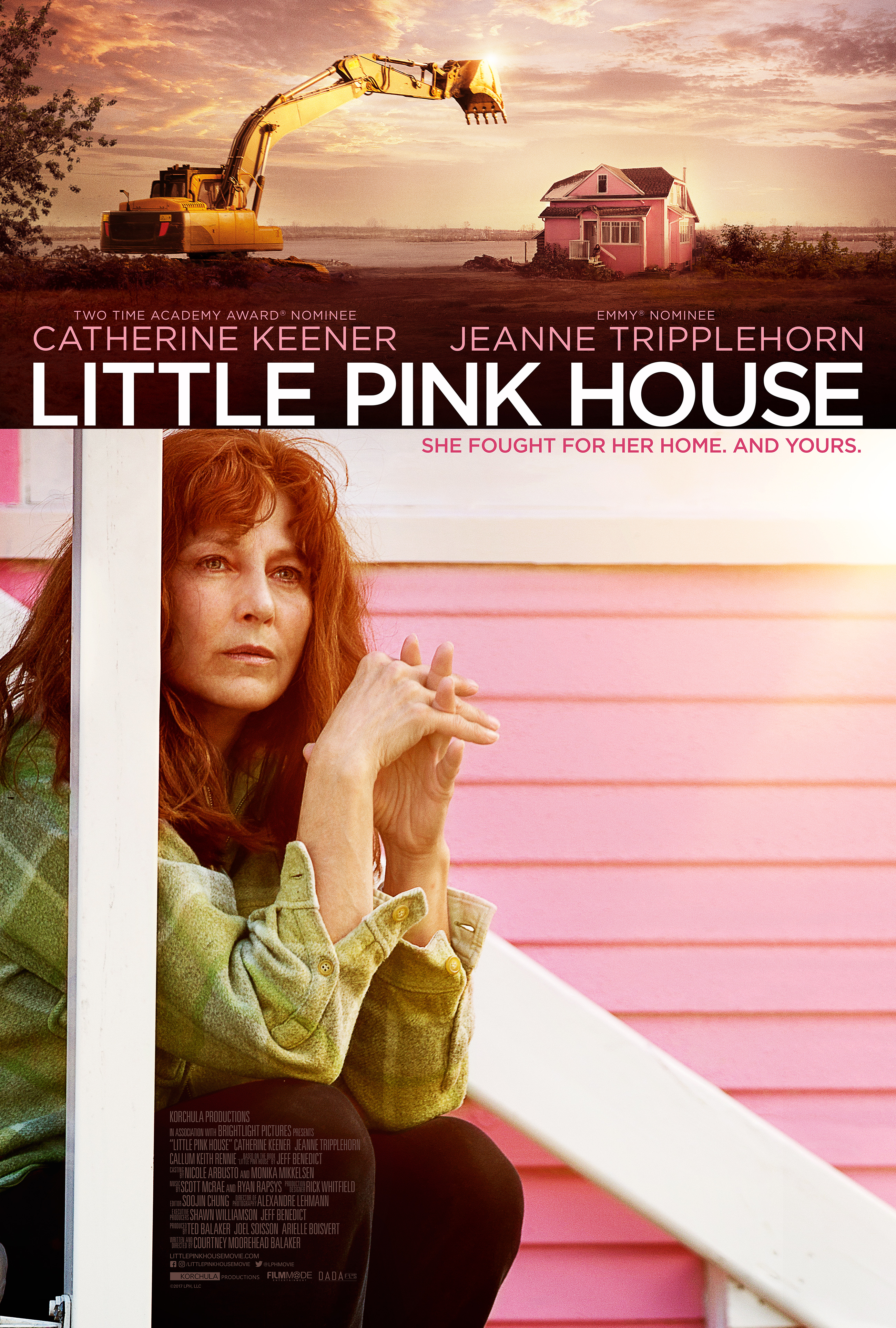 I finally got around to finding and watching Little Pink House after hearing its writer/director/producer, Courtney Balaker, on The Tom Woods Show back in May. Flying under the radar to one art house theater at a time, it didn’t come anywhere near me, and in the places it did land, it got reviews ranging from tepid to mildly positive. That’s a shame, because, with strong performances from Catherine Keener and Jeanne Tripplehorn, Balaker’s film tells the heartbreaking and all-too-true tale of what happened when an average American dared assert her basic rights against a government bent on “economic development” in partnership with big business.

Keener stars as Susette Kelo, a nurse who rebounds from a divorce by buying a fixer-upper house in the a run-down Fort Trumbull neighborhood of New London, Connecticut. Around the same time the state’s governor taps a popular college president (played by Tripplehorn) to lead a public/private partnership designed lure high-end out-of-state investment, using generous tax abatements and cheap Fort Trumbull waterfront real estate as bait.

Kelo goes about improving her own home—and the entire neighborhood—by investing her own money, time, and effort and building relationships with her neighbors. In contrast, Wells condescends to the property owners of Fort Trumbull, first with disingenuous lowball offers, then with passive-aggressive threats couched in the language of the common good. It’s hard to think a better example from recent popular culture that so deftly contrasts the economic means with the political means, which, according to Franz Oppenheimer, are the “two fundamentally opposed means whereby man…is impelled to obtain the necessary means for satisfying his desires.”

Kelo and a few others dig in, vowing not to sell at any price—a stance illustrating the essential idea that value, and thus prices, are determined subjectively by acting individuals (especially in this scene). But New London simply seizes property from the holdouts and gives it to Pfizer, claiming that the benefits of all those new pharmaceutical jobs and tax revenues meet the public use standard required by the Fifth Amendment.

Kelo and company have one last option: the Institute for Justice, which agrees to take the case if Kelo will serve as lead plaintiff. Kelo’s media appearances win the day in the court of public opinion, and the IJ team, led by Scott Bullock (Giacomo Baessato) demolishes New London’s legal case, making it clear that the government is simply taking property from one private entity and giving it to another and that the courts would have to bend over backwards to classify this as “public use.”

But of course that’s exactly what happens. Kelo loses in the Connecticut Supreme Court and then again in a landmark U.S. Supreme Court decision. The film is left to end on a bitter note with Kelo consoling her supporters with an almost-defiant speech from her front porch (“This is America, the home of the free, isn’t it?”), followed by a what-happened-next epilogue that’s maddening enough to cause all but the most dedicated believers in good government to consider going full Rothbardian on property rights.

The depressing, foreordained ending probably had something to do with the film’s lukewarm reception, but its understated antistatism also confounded some reviewers, including one from The New York Times, who whined, “Refusing to entertain even the possibility that eminent domain might be defensible, the movie desires no discussion. All it wants is our sympathy.” Nevermind that there’s really no way for a film to tell the true story a bunch of blue collar Americans getting bullied and robbed by the rich and powerful without eliciting our sympathy. Little Pink House does more than that by showing that the idea of property rights is not merely an abstract economic or legal concept, but the only moral way to defend the hopes and dreams of ordinary people against the whims of those who don’t mind using force to get what they want.

Aaron Keith Harris is a writer and editor from Dayton, Ohio. He blogs at Things Not Seen and may be reached at aaronkeith@gmail.com.