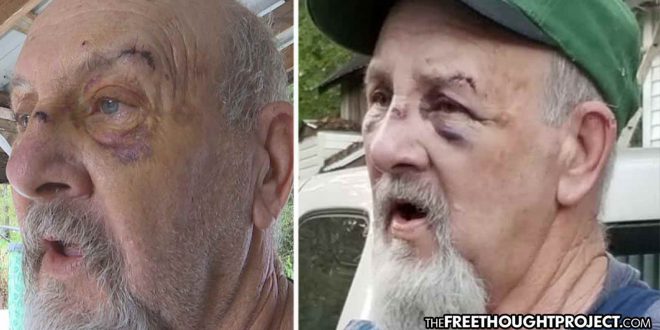 Despite police and their apologists constantly reminding us that “if we do nothing wrong, we have nothing to worry about,” innocent people continue to be arrested, beaten, and even killed by police carrying out deadly mistakes. Willard J. King, a Great-Grandfather from Sequatchie County, Tennessee found this out the hard way when he was beaten bloody by police in his own home during a wrongful raid, according to a lawsuit.

King filed a lawsuit this month for the incident which unfolded in October of 2019 when police raided his home and attacked him in front of  his granddaughter and her baby daughter.

According to police, the raid was conducted as police looked for a missing person, Matthew Henry. Authorities from several state and federal agencies, looking for the answer to Henry’s whereabouts, raided King’s home on October 3, 2019. Despite leaving behind a path of destruction and literal blood, authorities found nothing.

Grindstaff and her 4-month-old baby had to flee the home as tear gas and pepper spray filled the air. King says as police rushed in, they attacked him with a shield for no reason.

According to the lawsuit, defendants Marion County officers Brian Davis, Justin Graham and Andrew Voss, attacked King, beat him bloody and then “dragged his bloodied body by his feet outside of the residence.”

“That’s where I laid and bled till they handcuffed me then they drug me out here and onto the porch and you can still see blood out here that ain’t got cleaned up yet,” King told News 9 at the time.

Naturally, police claim this great-grandfather with a house full of family, attempted to attack the heavily armed militarized cops with shields, tasers, tear gas, and rifles, so they acted in self-defense.

“[W]e do not believe the allegations of the plaintiff in this case have merit regarding any wrongdoing on the part of our deputy or on the part of the county,” R. Dee Hobbs, the attorney for Hamilton County, said.

After the raid, King was arrested, only to be released without charges after the warrant was carried out. When local media attempted to get a copy of that warrant, they were told it was sealed by a judge. The body camera footage and arrest affidavit have also been withheld, per the request of District Attorney Mike Taylor. reports the Chattanooga Times Free Press.

King’s attorney Roger Dereck Layne, maintains King was “unlawfully seized and detained against his will” while officers were “executing a broadly granted search warrant that did not define any area or residence” to be searched.

According to the lawsuit, officers “recklessly used excessive force in order to cause [King] injury” despite the fact he “was not acting with harm” toward officers or anyone else.

The conduct of the participating officers “was unjustified, unreasonable and grossly disproportionate to the actions of [King], if any, and was deliberately indifferent to the substantive due process liberty interests” of King, violating his Fourth Amendment and Fourteenth Amendment rights.

According to the lawsuit, the raid caused King to “sustain severe, permanent injury, and emotional distress.” He is now seeking $1 million in compensatory damages and $2 million in punitive damages, along with unspecified damages for medical and legal expenses, loss of future earnings, enjoyment of life and pain and suffering.

Despite raiding the home of a great-grandpa and permanently injuring him in the process, police have yet to locate Matthew Henry, who has been missing since April of 2018.