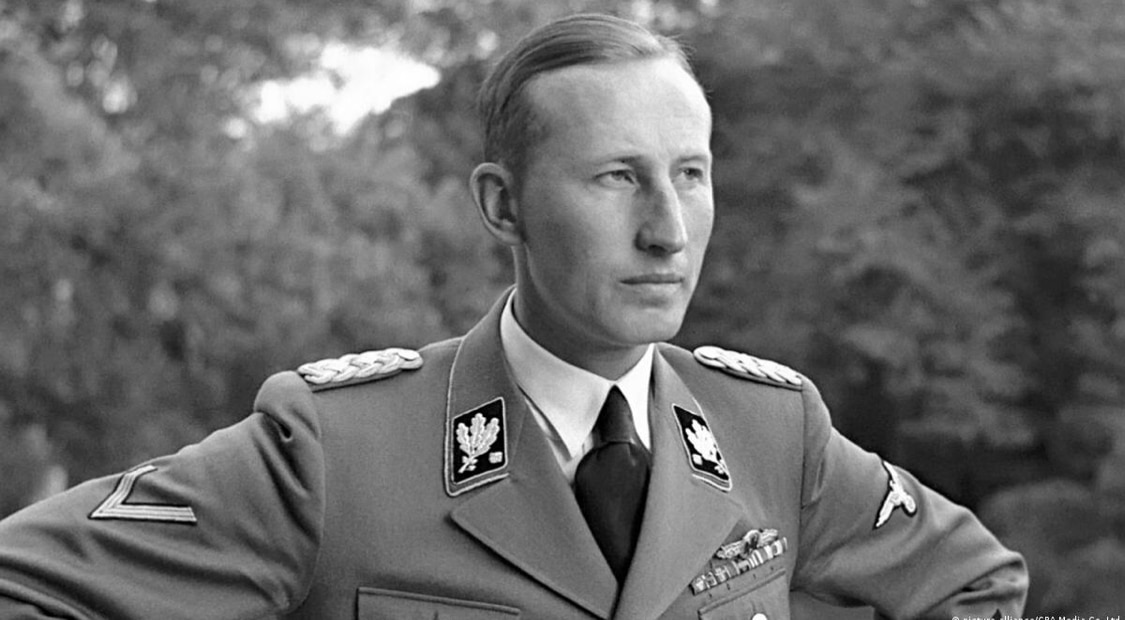 Martyr of the State

Known as “The Butcher of Prague,” Reinhard Heydrich was for the government of Nazi Germany an accomplished senior figure. He had the preferred look that many racialists enjoyed, clean cut and Germanic. A man that Adolf Hitler had described as having an “Iron Heart.” For many of the monumental events in the history of the Nazi government, Heydrich had helped organize or participated in them. From the 1936 Berlin Olympics to the Kristallnacht persecutions, he was a crucial element of the prewar government and its growth. Heydrich was an excellent administrator and would be an ideal asset for most any government; obedient, a stickler for bureaucraucy and administrative detail and void of compassion. A man of action. The particular ideology of the Nazi regime seemed to suit his talents and principles best. It was one of those perfect historical matches, where the outcome was terrible.

Heydrich became instrumental in establishing the task forces that rounded up Jewish people and placed them into ghettos. Some estimates claim that one million innocent people were murdered during the process of this bureaucratic implementation. Heydrich’s planning and attention to detail ensured that no child was left behind or no family was spared. No exceptions were made, it was the law. By 1941, Heydrich’s reputation was such that he was appointed as Deputy Reich Protector of Bohemia and Moravia, what was formerly known as Czechoslovakia. Executions, arrests, and slavery ensued. For the history that was being written for the Nazi State, he was a great man. Which is why he was one of the key figures at the Wannsee Conference, the ninety minute meeting that would write the laws allowing for the mass extermination of those determined to be of Jewish descent. Genocide was to become official government policy.

The cruelty of Heydrich’s administration in Czechoslovakia was brutal. He was an efficient government director, calculating and obedient to the ambitions of the state. He was the viceroy of an already industrial and productive sector pre-occupation, and he milked and bled the people under his rule to gain profit for the state. The nation was at war and men like Heydrich were crucial in protecting the state from defeat from its many enemies. In 1942 Heydrich was killed by British military-trained Czechoslovakian operatives. For the Nazi state, a hero had been slain by foreign backed terrorists. The reprisal was horrible.

Immoral Revenge of the Law

The German government’s instinctive proposal was to kill 10,000 random Czechoslovakians, but after some consideration the plan was dropped. The region was an important industrial sector for the war effort, so such random mass murder could interfere with production. Over 13,000 people were arrested, most tortured. Approximately 5,000 were then executed. German military intelligence falsely linked the village of Lidice to the assassination. Everyone in Lidice was punished. On the spot 199 males were murdered. 195 women and 95 children were taken into custody and ended up in concentration camps. Rape and torture ensued; eventually the women were gassed to death along with 81 children. The village of Lidice and neighboring Lezaky were destroyed. The full power of the state and control over human life was on display as the spirit of vengeance took hold.

A thorough manhunt followed; the German government threatened to murder more innocent people if information relating to the culprits did not reach them by the end of a deadline. A bounty was also set for information leading to the capture of the killers of Heydrich. One of the culprits, Karel Caruda, gave himself up and shared the location of his contacts. For his confession he was paid one million Reich-marks. When the Nazi agents raided a safe house, a 17-year-old boy was tortured, forced to get drunk, and then shown his mother’s severed head that had been placed in a fish tank by the authorities, all attempts to get him to talk. He was told that if he did not give up information, his father would be next. He ended up revealing what he knew to save his father. He was later executed with his father, his fiance, and her family. The state rarely keeps its promises.

Others were arrested and a siege occurred at the Karel Boromejsky church. The defenders fought back with determination against a larger German paramilitary force. The defenders were armed with pistols and the German government, besides using conventional weapons of war, also deployed tear gas and had the local fire fighters flood the church. The defenders were eventually killed and identified. The bishop and senior church leaders were tortured and then murdered by the Nazis. The mathematics is always simple: the death of one government official is worth the blood of thousands of innocent civilians to the state.

An Exceptional Man and Collective Responsibility

Heydrich was mourned as a hero. Two large funeral ceremonies were held in his honor. A great leader of the Nazi Party had been assassinated by terrorists and the reprisal was a punishment to those associated by any collective identity to have been linked to the killing. It is the mindset that all governments impose when they embrace policies of vengeance. It may be the carpet bombing of cities, the targeted attacks on infrastructure, embargoes, or the destruction of Czechoslovakian villages. Because of his position in the German government Heydrich was an important human being. He is above others; in some ways such an individual is sacred and in death the government will sanctify such a man and justice will be absolute to any who would dare defy.

The collective responsibility of punishment utilized by the German government was not unique to the Nazi regime. It is in essence common among all governments. It is found inside of prohibitions and censorship and each regulation. The assumption that all are to be held responsible because of the imagined potential actions of a few or because in the past a minority had in some way been linked to that which is now being banned or controlled. The collective belongs to the state, to be ruled and regulated by the government. Regardless of the ideology of the government the outcome always is that the state is more important than individuals. The state is absolute but the elites that fill its key positions or hold influence are examples of unique human beings that transcend the rest of the citizenry. The more egalitarian the policies of the state, the more it collectivizes and the more the planners, experts, and policy makers of importance become exceptional and above all others.

Because the Nazi regime was defeated, men like Heydrich are no longer seen as heroes (except from among the ranks of a perverse few). Heydrich is seen as a criminal though he acted lawfully according to his own government. He was cruel and savage, though in victory he would have been justified. People like Heydrich are called monsters, though they were human beings. They left a path of pain and death for millions of innocent civilians. Any neutral moral observer would judge a person for such outcomes and that is all that should matter. No context needs to be considered other than the contribution to so many innocent deaths and countless tortures. We however do not live in a moral and neutral world; context and perspective seems to reign and steer many minds. For those inside Nazi Germany proper, Heydrich was a hero. His victims were necessary eggs to be broken in order to improve the omelette of the state, or so it is often said well beyond the bloody history of Nazi Germany.