Sanctions Set America on the Path to War, Claiming Lives with No Benefit

Sanctions Set America on the Path to War, Claiming Lives with No Benefit 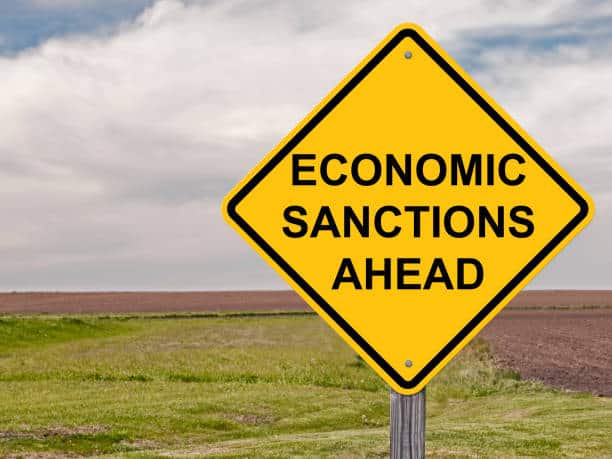 Sanctions have quickly become the foreign policy establishment’s favorite tool. Blacklisting governments opposed to the empire’s agenda allows for politicians to look tough on ‘evil regimes’ while stopping short of the type of warfare that is largely opposed by the American people.

US leaders present sanctions as a low-cost option to punish bad actors and give oppressed people a chance to rise up. However, the results are almost always the opposite.

The Cuban embargo presents the best empirical evidence of the failure of sanctions. Though the blockade just celebrated its 60th anniversary, the Castro government remains in power, serving only to increase the country’s poverty, not its freedom. While Joe Biden campaigned on rolling back the Donald Trump-era restrictions on trade and travel to Cuba, he has so far failed to live up to that promise and is likely to pass the blockade onto his successor.

Further, Cuba presents a perfect example of the hypocritical demands Washington attaches to its sanctions. As the US says Cuba must free its people to access the world economy, it continues to run a lawless torture prison on the island, largely filled with innocent Muslims.

Since the Kennedy presidency, sanctions have been wielded against a long list of countries. The US is currently waging ‘maximum pressure’ campaigns against Iran, Venezuela, North Korea, and Syria, a blockade against Yemen and Cuba, a trade war with China, and additional penalties on various people in Russia, Asia, the Middle East, Latin America, and Africa for assorted infractions of the US-enforced “rules-based international order.” Those policies have seldom had the intended result.

Not to be deterred by the decades of failures, the US government is seeking to ramp up its economic wars even further.

For weeks, Senate leadership has been negotiating a sweeping bill that would target Russia’s economy. In describing the “Mother of all Sanctions” proposal to the Washington Post this week, Senate Democrat Bob Menendez salivated over the prospect of “devastating” Russia’s economy, saying “every Russian would feel it at the end of the day.”

A troubling aspect of this new bill is its attempt to tie future Russia sanctions to cyberattacks, with Democratic Senator Chris Murphy saying “If there were pre-invasion sanctions, they would be connected to Russian cyberattacks inside Ukraine.”

Of course, the US has wrongly attributed several ‘cyberattacks’ to Russia in recent years.

Though economic sanctions lack the graphic violence of a bombing campaign, the US government is well aware of their cruel effects on impoverished people the world over. More than 100,000 children were killed as a result of penalties on Iraq in the 1990s, and ongoing sanctions continue to produce food and medicine shortages in Iran and Venezuela – where they’re estimated to have claimed tens of thousands of lives.

In Yemen, meanwhile, the world’s most dire humanitarian crisis rages on thanks in no small part to a US-backed blockade of the country’s commercial ports. At least 377,000 people have died throughout the Saudi-US war there, many from deprivation.

However, freezing Afghanistan out of the world economy may be the most brutal example of US economic warfare. The UN is seeking billions in aid for Afghans and estimating that millions could starve to death because of destitution. A number of international officials have posited that the new Afghan government’s – yes, the Taliban – inability to access the international market and state bank accounts is a major cause of the suffering.

While there seems to be an obvious ethical issue with starving children to death, Murphy sees possible aid going to the Taliban as a bigger problem, arguing “There is, frankly, moral hazard in putting billions into Afghanistan right now.” Oddly, Murphy sees Trump’s ‘maximum pressure’ campaign on Iran as a “spectacular failure.”

Republican Senator Todd Young has echoed his Democratic colleague’s top concern regarding relief to Afghanistan: “the worst-case scenario involved would be if humanitarian aid were diverted from legitimate recipients towards the Taliban and [their] partners and terror.”

A typical trope used to justify sanctions or similar measures, including in the case of Afghanistan, is that the US must never do business with ‘illegitimate regimes.’ Republican Senator Rand Paul echoed that sentiment on The Hill’s ‘Rising’ show earlier this week, telling the hosts the Taliban is “not a legitimate elected government, no way in the world would I give them that money.”

Maybe the most cynical aspect of US sanctions is how they are presented to Americans at home – as targeted punishments for bad actions, often against those in senior government positions. US officials have framed international sanctions on North Korea, for example, as a means to deprive the country’s leaders of luxury goods – Hennessy cognac in the case of deceased ruler Kim Jong-il – in order to drive them to the negotiating table and ultimately free their people. Though penalties have remained in place for years, they’ve done little to shake Pyongyang’s totalitarian rule.

Think tank leaders – like FDD’s Mark Dubowitz – present sanctions as a “peaceful” alternative to hot war. In a recent Wall Street Journal analysis, he was quoted as saying: “After five or six years of significant sanctions relief, the Iranian economy would have recovered. They would have immunized themselves against our ability to use peaceful sanctions pressure in the future. The question was always not whether we were going to confront Iran. The question was whether we were going to confront Iran in a weaker or stronger position.”

Of course, this leads to another major problem with US sanctions: the demands made by Washington are often unrealistic. Dubowitz asserts that it is inevitable that the US will confront Tehran, but even Israel’s Prime Minister Naftali Bennett does not believe that Iran is going to move towards a nuclear weapon, with or without sanctions.

Rather than leading to a peaceful resolution of tensions, sanctions have the opposite effect. Countries are often hesitant to make concessions in exchange for sanctions relief as the US has proved to be an unreliable negotiating partner, backing out of deals with North Korea, Iran, Iraq, and Libya.

Unable to negotiate a way forward, frozen conflict has been created between the United States and a litany of ‘adversaries.’ After years of unproductive penalties, the hawks will claim the ‘peaceful’ option of sanctions has failed and the targeted regime is simply too unreasonable to be dealt with non-violently – as is increasingly the case with Iran. The long duration of sanctions allows DC’s foreign policy Blob to firmly establish narratives such as ‘Uyghur genocide,’ ‘Iran’s nuclear weapons program,’ and ‘Saddam’s WMDs’ into the American consciousness.