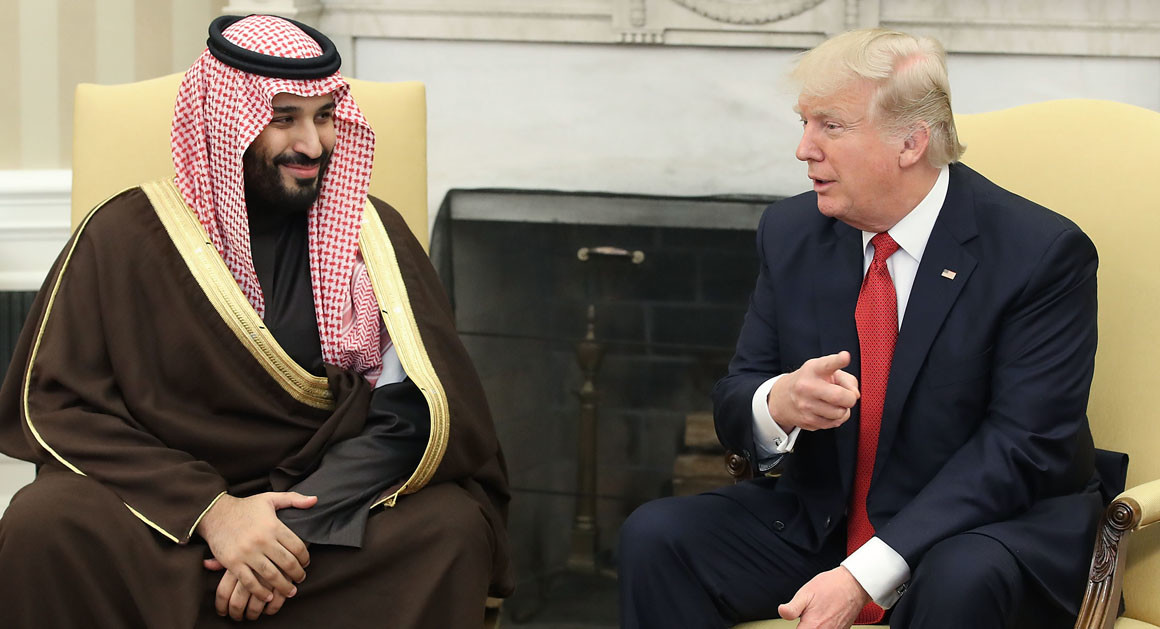 While the chattering classes spend all their time rehashing Donald Trump’s alleged — there’s a word you don’t much see in the media anymore — coordination with Russians over their alleged — there it is again — hacking of the Democrats’ email, a story with far more ominous implications is being ignored. I refer to Trump’s trip, beginning today, to Saudi Arabia and Israel.

Whatever Trump might have done with the Russians, if he did anything at all, it has none of the potential for death and destruction that his meddling in the Middle East has. He is doing far more than doubling down on what his predecessor, Barack Obama, did. For a guy who promised to concentrate on domestic matters, he’s sure engaging in a lot of empire preservation. But, then, some of us are not surprised. His words were never to be trusted.

The two most destabilizing countries in the Middle East are Saudi Arabia and Israel. Both want to reduce Iran to insignificance, and that starts with getting rid of Iran’s ally, Syrian ruler Bashar al-Assad. Trump says he wants to concentrate on ISIS and not Assad, but his actions belie his words. Witness his launch of 59 Tomahawk missiles at a Syrian airbase after unproved and seriously challenged assertions that Assad used chemical weapons against Syrians. U.S. forces have also hit pro-Assad forces twice in recent months, including on Thursday.

The “radical Islamic” Saudi antipathy to Assad and its sympathy for the various stripes of bin Ladenites are well-known. So is that fact that Israeli leaders have more than once said they prefer militant Sunni Muslims (like al-Qaeda) to Shiites, that is, Iran. For over two years the Saudis have been committing genocide against the people of Yemen — indispensably facilitated by the U.S. government — in the name of fighting al-Qaeda’s adversary, the Houthis, who practice a form of Shia Islam but who are not Iranian proxies. Obama signed on to the Saudis’ war to ease their discomfort over the Iran nuclear deal.

All this is apparently fine with Trump. After all, he demonizes Iran every chance he gets. He would agree with Barack Obama, who told an interviewer some years ago that removing Assad would have the benefit of harming Iran. Hillary Clinton agreed.

Trump of course has denounced the multilateral agreement designed to ensure that Iran does not make nuclear weapons — even though all the evidence says Iran’s rulers have never wanted such weapons and have done nothing to produce or obtain them. Trump’s State Department certifies that Iran is complying fully with the agreement, but that has not kept him and his team from rattling the saber and imposing new sanctions as old ones are relaxed under the terms of the deal.

On the eve of Trump’s trip, Josh Rogan of the Washington Post reported that Trump “in Riyadh this week … will lay out his vision for a new regional security architecture White House officials call an ‘Arab NATO,’ to guide the fight against terrorism and push back against Iran. As a cornerstone of the plan, Trump will also announce one of the largest arms-sales deals in history.”

This comes from the guy who once portrayed the original NATO as an albatross around the necks of Americans — before he became president and learned to love the alliance, which has always provided cover for U.S. imperial action. (Who knows what he’ll say next?) In a tribute to the power of rationalization, “officials” told Rogan that “the [Arab NATO] concept fits three major tenets of Trump’s ‘America First’ foreign-policy frame: asserting more American leadership in the region, shifting the financial burden of security to allies and providing for U.S. jobs at home (through the massive arms sales).”

By that logic the U.S. global empire qualifies as an “America First” economic-stimulus program.

According to Rogan, “the Trump team gave the Saudis a list of Trump priorities, calling on the kingdom to step up actions to combat radical Islamic extremism, intensify the fight against the Islamic State and share the burden of regional security.”

Considering the Saudi record, and if we wanted to be charitable, we could chalk that up to wishful thinking

That mammoth arms sale certainly won’t be good news for the suffering Yemenis. Rogan writes that “final details are still being worked out, but officials said the package will include between $98 billion and $128 billion in arms sales. Over 10 years, total sales could reach $350 billion…. [M]ost of the [weapons and ships] would be built by American defense contractors.” The military-industrial complex is expected to be on board with Trump’s program.

has won a reputation for impulsiveness, aggression and poor judgement in the two-and-half years he has held power. Early on he escalated the Saudi role in Syria, thereby helping to precipitate Russian military intervention, and initiated a war in Yemen that is still going on and has reduced 17 million people to the brink of famine. Combine his failings with those of Trump, a man equally careless or ignorant about the consequence of his actions, and you have an explosive mixture threatening the most volatile region on earth.

Cockburn notes that the prince recently threatened an attack on Iran. The prince feeds the self-serving and crazy fear that Iran is on the march toward domination of the Middle East, a line that Israel is happy to endorse.

As for Israel, the region’s nuclear monopolist, it will tolerate no Middle East power that is not sufficiently obeisant to the American-Israeli agenda. Iran, moreover, has had the temerity to befriend Hezbollah, the only group able to keep Israel from having its way in Lebanon. Keep this in mind whenever you hear Iran condemned as the “world’s greatest state sponsor of terrorism.” Also recall that for years Israel has, with U.S. help, has conducted covert and cyber war against Iran and has sponsored anti-Iran terrorism. Moreover, Israel’s ruling class is long on record as favoring destabilization of the Arab states. It expects the Jewish state to profit from chaos in the region.

Meanwhile, Israel’s oppression of the Palestinians and the occupation of their land continues. While Trump gives mixed messages about how this conflict could be resolved, it is unlikely he will stray very far from what his old friend Israeli Prime Minister Benjamin Netanyahu wants, which has nothing to do with justice. This is bad news for the Palestinians, though perhaps not for their so-called representatives.C

Confrontation with Iran (and potentially its ally Russia) — the theme of Trump’s trip — could cause a far bigger catastrophe than Trump’s alleged dirty dealings with Russia or any alleged campaign improprieties.