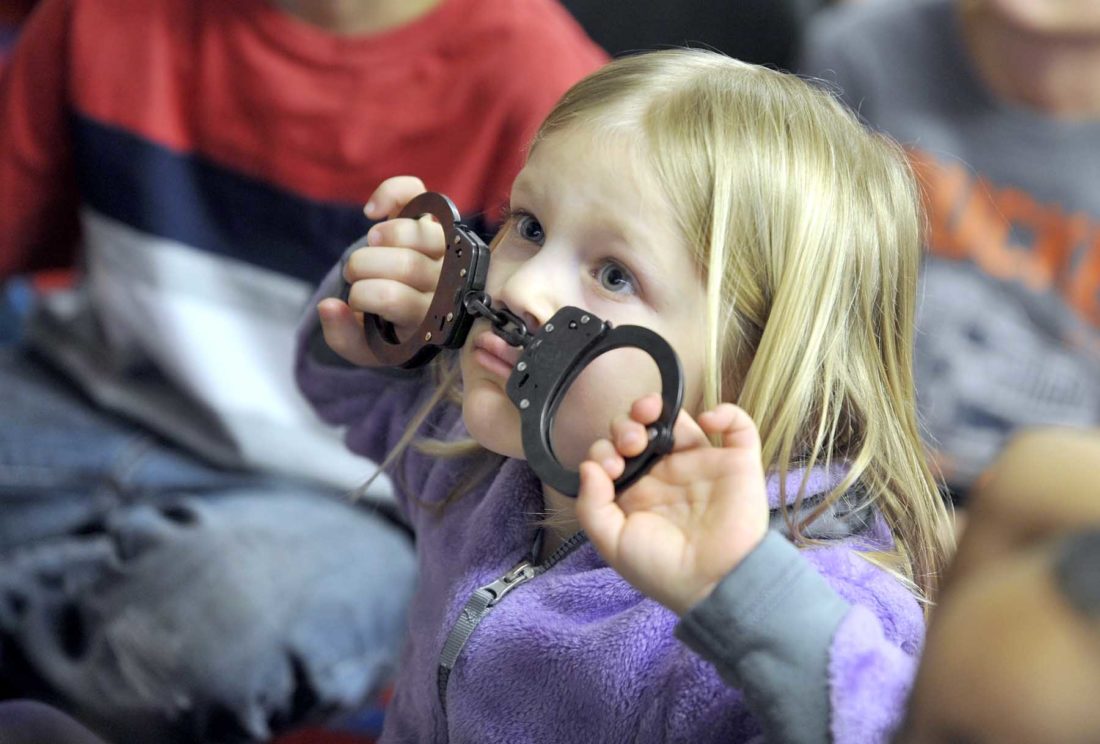 Integral to the American concept of liberty is the right to hold the state at bay, which is why children are never too young to be taught to regard government employees with suspicion and defensive hostility. Some conscientious parents in Northampton, Massachusetts acted on that principle by demanding an end to a program intended to habituate public school inmates to the presence of police officers.

The local police department, acting on an initiative that originated with the International Association of Chiefs of Police, had dispatched officers to the local elementary school each week for an event called “High-Five Friday,” in which students would exchange friendly greetings with cops (who, in practically any other context, would treat such physical contact as a felonious assault on an officer). Police Chief Jody Kasper explains that she thought “it was a great way to start building relationships with young kids.”

That program was “paused” following complaints from a handful of parents who believe that it is the better part of wisdom to teach their children to avoid contact with the police, rather than seeking it out. In announcing the decision on its Facebook page, the department mentioned that “children of color, undocumented immigrant children or other children who may have had negative encounters with law enforcement” had expressed concerns about the program, which cued up the predictable reactions from the punitive populist faction.

“Why don’t you toughen up out there in Northampton, all right?” eructated Bill O’Reilly, offering the jocular suggestion – at least, I think he was kidding – that the principal and the school board should be arrested. Minor-league talk radio personality Charlie Brennan insisted that “this is why Donald Trump’s gonna get re-elected – stories like this.”

A contributor to The New American magazine who serves as that publication’s liaison to the white nationalist subculture snarked that “there’s no more `safe space’ for law-abiding citizens than when the police occupy part of it,” and insisted that no true American could possibly object to having an armed, costumed stranger clothed in “qualified immunity” breathing down his neck.

“It’s entirely understandable, for instance, that a child hailing from a Third World nation with corrupt police may feel apprehension at the sight of the men in blue,” he patriot-splained. “But not that long ago people would have understood the proper response: You take the student aside and gently explain that the police visiting his school are there as friends.”

“Some might also wonder about the parenting evident here,” he continued in the style of a Soviet commissar tutoring parents about their duty to raise children in the fear and admonition of the state. “If your child has some irrational cop phobia, do you try and educate and change his mind? Or should you moan and groan and change all of society to accommodate irrationality?”

The “Caucasian leftists” and “minority” parents who complained about the police outreach program embody the “snowflake spirit of the age,” concludes the TNA contributor, whose otherwise barren rhetorical pantry is well-stocked with clichés. To be fair, this story does expose a rather shocking failure on the part of parents in the community – that is, those who accepted the program with bovine docility, rather than expressing skepticism about it.

If it is “irrational” for parents to teach their children to be leery of police officers, why do police officers and prosecutors cultivate that attitude within their own children?

Every parent whose children have been sentenced to attend the Regime’s mind-laundry should review the advice offered by Professor James Duane of Regent University Law School in his slender and indispensable book, You Have the Right to Remain Innocent.

Over the past several years, Professor Duane has made hundreds of presentations, each of which begins with an invitation to any audience members whose parents were police officers or prosecutors to share the advice they had been given by their parents about what they should do when the police what to talk with them.

“Every time this happens, without exception, [I’ve been told] the same thing: `Years ago, my parents explained to me that if I were ever approached by a law enforcement officer, I was to call them immediately, and they made sure that I would never agree to talk to the police,'” Duane recounts. “Not once have I ever met the child of a member of law enforcement who had been told anything different.”

News accounts of the controversy in Northampton claim that the parents who objected to the police outreach program included those with “children who may have had negative encounters with law enforcement.”

“Wow, only in grammar school, and they already have a sour relationship with police,” sneers the above-quoted TNA commentator. “Their futures are bright.”

It is surpassingly easy for children to find themselves detained, shackled, or otherwise abused by police as a result of entirely trivial misconduct. Witness the case of Michael Davis, a five-year-old from California who was arrested, cuffed, and hauled away to jail for “battery on an officer” after he pushed away the hand of an officer who had touched him without consent and kicked the assailant in his knee in an act of righteous self-defense.

This case, as it happens, did involve a delicate snowflake who filed a complaint after his feelings were hurt – none other than Lt. Frank Gordo, who claimed that he had been “discriminated” against the mother of his victim after she took the story to the media.

Incidents of this kind are becoming commonplace. Two years ago a misbehaving third-grader in Covington, Kentucky had his arms shackled behind his back at the elbows for fifteen minutes by a sheriff’s deputy. The eight-year-old supposedly attempted to elbow the deputy after going to the bathroom.

“You don’t get to swing at me like that,” the heroic tax-feeder lectured his captive. “You can do what we’ve asked you to do, or you can suffer the consequences.”

Yes, it’s never too early to begin indoctrinating children about the state’s monopoly on violence.

In 2014, deputies in Greene County, Virginia handcuffed a four-year-old who had been disruptive in class and briefly detained him at the sheriff’s office. The sheriff insists that the deputy “did what he had to do” and claims that the mother was “appreciative of the way he handled the situation,” which if true would be utterly horrifying.

Until recently, school resource officers in Texas would routinely treat student misbehavior as misdemeanor criminal offenses, issuing citations that could lead to fines and jail time. School officials in Syracuse, Utah have warned that students who are found at the high school during release-time religious instruction would be issued trespassing citations that, once again, can lead to fines and even jail time. The amalgamation of public education and law enforcement has created countless variations on the theme of criminalizing what had once been treated as minor disciplinary matters.

While police can cause problems for students who misbehave, their presence in schools can be even more dangerous to youngsters who are obedient and conscientious. Professor Duane urges parents to teach their school-age children that “you cannot listen to your conscience when faced by a police officer and think I have nothing to hide.”

Police are trained to lie as an investigative tactic, and rewarded when their lies prove to be instrumental in obtaining convictions. Innocent and well-manned children who somehow find themselves on the receiving end of police attention are “sometimes the most likely to be unfairly influenced by deceptive police interrogation tactics, because they tragically assume that, somehow, `truth and justice will prevail’ later even if they falsely admit their guilt,” Duane emphasizes. “You cannot safely trust a single thing police officers say when they are trying to get you to answer their questions…. Even if you are innocent, the police will do whatever it takes to get you to talk if they think you might be guilty.”

No better illustration of that reality can be found than the case of Idaho Falls resident Christopher Tapp, who has spent twenty years in prison for a murder he did not commit. The only evidence against Tapp was a patently false confession extracted from him through the efforts of IFPD Sergeant (and future Idaho Falls mayor) Jared Fuhriman.

Fuhriman had been a DARE instructor and resource officer at Tapp’s junior high school. Following the June 1996 murder of 18-year-old Angie Dodge, the IFPD was left without any good leads after DNA evidence had cleared the three young men considered suspects – including Tapp. Fuhriman had originally intended to bully Tapp into implicating two of his friends, and used his supposed friendship with his victim to lure him into lengthy interrogation sessions. Once all three of the suspects had been cleared, the interrogation mutated into something akin to psychological torture. Eventually Fuhriman convinced Tapp that unless he confessed to some role in the murder, he would inevitably be sent to the electric chair.

“Christopher would just keep saying, `Fuhriman is my friend, mom – he wouldn’t put my life in jeopardy, he wouldn’t lead me astray,” his mother, Vera Tapp, told me in a telephone interview. “He was just such a `good old boy’ with Christopher…. You can see it in the videos – `Oh, Christopher, we’re friends, we’re buddies,’ you know, laughing and joking around. And that’s just what he did when [Tapp] was in junior high. He [was] learning people’s trust and how to manipulate people. And that’s what he did – he manipulated Christopher.”

It is a screaming pity that Christopher Tapp wasn’t given the advice that police and prosecutors offer to their own children: Do not, under any circumstances, talk to a law enforcement officer, beyond demanding access to your parents and, if possible, an attorney.

Given that police and prosecutors tell their own children not to trust law enforcement officers, why shouldn’t parents employed in the productive sector do likewise?