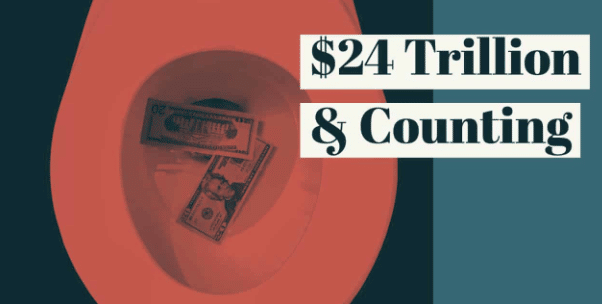 The U.S. national debt pushed above $24 trillion on Tuesday.

The U.S. government was already running massive budget deficits long before the coronavirus pandemic and the debt was piling up at a dizzying pace. Response to the outbreak has put spending and debt in hyperdrive.

The Trump administration has added $1 trillion to the national debt in just six months.

It’s easy to just brush off the spending spree. Virtually everybody agrees the stimulus is necessary to deal with the economic impacts of coronavirus. But the Trump administration was stimulating long before this emergency. Uncle Sam was already on pace for a trillion-dollar shortfall long before the pandemic. That’s the kind of budget deficit one would expect to see during a major economic downturn.

The federal government has only run deficits over $1 trillion in four fiscal years, all during the Great Recession. The fifth trillion-dollar deficit was coming down the pike in fiscal 2020, despite what Trump kept calling “the greatest economy in the history of America.”

To put the growth of the national debt into perspective, the debt was at $19.95 trillion when President Trump took office in January 2017. It topped $22 trillion in February 2019.  That represented a $2.06 trillion increase in the debt in just over two years. By November 2019, the debt had eclipsed $23 trillion. Now, less than six months later, we’re at $24 trillion, with much of the coronavirus stimulus still in the pipeline. That’s a $4 trillion increase in the debt since Trump took office.

Ironically, there is bipartisan support for the massive coronavirus spending-spree and virtually no concern about the increasing debt. I say ironically because Republicans had a much different response when Obama pushed his stimulus plan through in response to the 2008 financial crisis. The GOP grassroots pitched a fit and the Tea Party was born. Today, many of the people who marched in those Tea Party rallies against the Obama spending are eagerly planning how to spend their MAGA-Bucks.

Trump supporters often claim the debt isn’t the president’s fault and the blame should fall on Congress. The legislative branch does bear its share of responsibility, but the White House has significant input into the budgeting process and the president has never once submitted a budget that cut overall spending.

In reality, the borrow and spend policies today are every bit as problematic as they were in the Tea Party days. In effect, we have the world’s biggest debtor trying to guarantee everybody else’s debt.

The massive debt raises a number of questions few people seem to be asking. For instance, how will all of this government borrowing impact the bond market?

Investors poured into U.S. Treasuries as a safe-haven as the coronavirus crisis grew. Interest rates plunged, with the yield on the 10-year Treasury dipping to record lows below 0.5 percent. At some point, the demand for bonds will ebb, but the supply certainly won’t. The  U.S. Treasury Department is going to have to sell a massive amount of bonds to fund all of this deficit spending.

The Federal Reserve has stepped in to backstop the borrowing. The central bank is set up and primed to monetize all of this debt through QE Infinity.

Through quantitative easing programs, the Fed buys U.S. Treasury bonds on the open market with money it creates out of thin air. Ostensibly, by creating artificial demand for Treasuries, the Fed can soak up excess supply and hold interest rates down. It has no choice but to intervene in the market because rising interest rates would be the death knell for this debt-riddled, overleveraged economy.

But the central bank will create trillions of dollars out of thin air and inject it into the economy in order to run this debt monetization scheme. That raises the specter of inflation. This is one reason Schiff recently said hyperinflation has gone from the worst-case scenario to the most likely scenario.

The Fed got away with this once. We didn’t see the type of price inflation one would expect with the three rounds of QE in the wake of the 2008 financial crisis. The inflation went into the stock market and other asset bubbles. That could conceivably happen again. But the last time around, then-Federal Reserve Chairman Ben Bernanke swore the QE wasn’t debt monetization. He promised it was a temporary expansion of the balance sheet. He insisted there was an exit strategy.

There was no exit.

And today, nobody is even talking about an exit strategy. Will investors actually believe this is going to be temporary? It seems unlikely.

I also see little concern about how all of this government debt will impact economic growth.

The CBO warned before the coronavirus pandemic that the growing “debt would dampen economic output over time.” In fact, studies have shown that GDP growth decreases by an average of about 30 percent when government debt exceeds 90 percent of an economy. U.S. debt already stood at around 106.9 percent of GDP before coronavirus. Ever since the U.S. national debt exceeded 90 percent of GDP in 2010, inflation-adjusted average GDP growth has been 33 percent below the average from 1960–2009, a period that included eight recessions.

Europe’s spending binge serves as a prime example of the impact of debt on economic growth.

Most people seem to believe the president will snap his fingers in the near future and the economy will snap back to normal. But the economy was broken before coronavirus. Now the government and the central banks are doubling down on the policies that broke it to begin with. There aren’t a lot of scenarios where this ends well.