Home Economics The Fed Looks Increasingly Concerned About Liquidity and Growth — Even If... 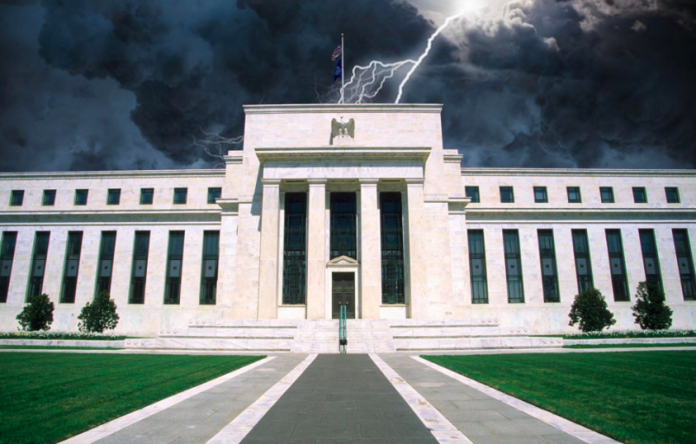 The Federal Reserve lowered its benchmark interest rate on Wednesday, cutting the target federal funds rate by 0.25 percent to a range of 0.5 to 0.75 percent.

The Fed’s rate-setting committee, the FOMC, has now cut rates three times this year. The committee’s rhetoric around the rate cut was the usual routine. The committee’s statement indicated that ” labor market remains strong and that economic activity has been rising at a moderate rate.” But the official statement says something similar nearly every time the committee meets. So, there is no information here to suggests why the committee is cutting now versus all the other times the labor market is “strong” and economic strength is “moderate.”

Two members of the committee voted against the cut: Esther L. George and Eric S. Rosengren.

Rosengren voted against the measure because he wanted a bigger ate cut. George, like her predecessor Thomas Hoenig at the Kansas City Fed, is relatively hawkish — although not the extent Hoenig was.

Thus, George noted in response to the rate cut: “While weakness in manufacturing and business investment is evident, it is not clear that monetary policy is the appropriate tool to offset the risks faced by businesses in those sectors when weighted against the costs that could be associated with such action.”

In other words, George recognizes that, yes, there are downsides to expansionary monetary policy.

Although the Fed statements offer no insights, the fact the Fed continues to cut rates suggests it is working from a position of fear about the true strength of the economy. Although jobs data continues to point to expansion, a number of other indicators look less rosy. The Case-Shiller index, for example, has fallen to 2-percent growth, and appears to be headed toward zero. We have seen a similar dynamic since 2006. Moreover, new housing permit growth has been negative (year-over-year) in six of the last ten months. Tax receipt data has also been weak, with seven out of the last ten reported periods showing negative year-over-year growth.

It’s true that other indicators point to strength, but if things are going so well, why cut rates?

After all, the target rate is already remarkably low even by the standards of the most recent expansion, when the Fed Funds rate was allowed to rise to over five percent.

The Fed has justified this ultra-low-rate policy with theories about the natural interest rate, and about the alleged need to keep prices at or above two-percent inflation.

The problem is that the Fed cannot actually observe the natural interest rate and the two-percent inflation standard is a completely arbitrary standard invented in recent years.

Nonetheless, the Fed continues to look relatively restrained compared to other central banks, to which its policies are in part a reaction. Other central banks have set a very low bar, to be sure, but the Fred nonetheless looks almost hawkish compared to the ECB and the Bank of Japan. Both are pursuing a negative-interest-rate policy, and even with the latest rate cut, the Fed’s target rate also remains above that of the Bank of England, and equal with the Bank of Canada.

But the target rate is, of course, not the Fed’s only policy tool. To address liquidity problems observed during the recent repo crisis, the Fed has stepped up purchases and added to its balance sheet.

And then there is the interest the Fed pays on reserves. On Wednesday, the FOMC also announced a cut to the interest rate “paid on required and excess reserve balances,” dropping the rate from 1.8 percent to 1.55 percent, mirroring the drop in the fed funds rate.

This keeps the interest paid on reserves at 0.2 percent below the fed funds rate. That’s the biggest gap we’ve seen since 2008, and it suggests the Fed wants more lending in the real economy, even though it’s also apparently concerned about liquidity for banks.

This makes sense if we’re in a late phase of the boom which brings increased demand for loans, but without sufficient savings and earnings at the street level to assure liquidity for banks through the marketplace. This is only a problem one encounters in an economy built on central-bank credit expansion. Central bankers no doubt are sure they can navigate these waters, but its unclear how long they can keep the current boom going.

Republished from the Mises Institute.
- Advertisement -

Worth the Price? Joe Biden and the Launch of the Iraq...